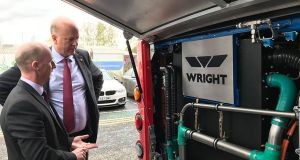 British transport secretary Chris Grayling with head of product development for low-emissions buses at Wrightbus, Jim Morrison, during a visit to the Wrightbus factory in Ballymena. Photograph: Department for Transport/PA Wire

The British government wants to see business as usual in Northern Ireland once the UK leaves the EU, the transport secretary has said.

On a visit to a Wrightbus coachbuilding facility in Ballymena, Co Antrim, Chris Grayling attempted to allay the uncertainty that exists within sections of the region’s business community on the consequences of Brexit for trade with the Republic and continental Europe.

“We are very committed to maintaining a free-moving border between Northern Ireland and the Republic of Ireland,” he said.

“This is something that has existed for decades, we have had the Common Travel Area since 1923. The economies are so closely linked – all of us want to see close relations, want to see free flowing borders, business able to carry on what it does now.”

Mr Grayling was asked whether his visit to a factory in the DUP heartland of North Antrim was related to the government’s confidence-and-supply agreement with the Northern Ireland party.

Mr Grayling was shown the low-emissions technology being used in hydrogen- and electric-powered buses being manufactured in the Ballymena plant.

“Wrightbus is selling buses around the world,” he said.

“I go around the world selling UK transport capabilities and I want to be able to go out there and say we have a fantastic business here in Northern Ireland and we want to see Wrightbuses in cities all around the world.”