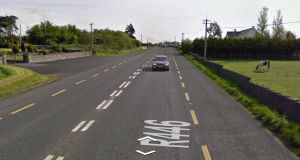 A man was pronounced dead after his car was in collision with a bus at about 10am today on the R446 at Ballydangan (general view above), Co Roscommon. File photograph: Google Street View

A man in his 50s was fatally injured when his car hit a bus at Ballydangan, Co Roscommon, this morning.

The man was pronounced dead at the scene and his body removed to Roscommon Hospital after the incident at about 10am on the R446.

The bus had 12 passengers at the time.

The stretch of R446 was closed to facilitate an examination by Garda Forensic Collision Investigators and local diversions put in place.

Gardaí in Roscommon are appealing for witnesses or anyone travelling on the R446 from Ballinasloe to Athlone between 9.30am and 10.15am today to contact Roscommon Garda station on 090 6638300, the Garda Confidential Telephone Line, 1800-666-111, or any Garda station.