The rental sector in Ireland has been exposed in the RTE Investigates programme, Prime Time: Nightmare to Let. Video: RTE 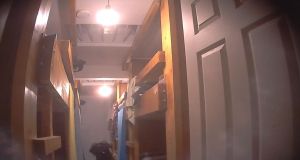 An image from the ‘RTÉ Investigates’ programme, broadcast on Thursday, showing slum-like conditions in rental properties across the State. 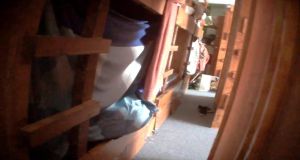 An image from the ‘RTÉ Investigates’ programme, broadcast on Thursday, showing crowded conditions in rental properties across the State.

Substandard and severely over-crowded and dangerous rental accommodation has been exposed by a documentary broadcast on Thursday night.

Dublin Fire Brigade has closed three buildings following the undercover investigation by RTÉ Investigates and a representative organisation for landlords has described those who rent out slum-like houses and flats as “sharks and vultures”.

The three multiple-occupancy buildings that were closed housed more than 120 tenants.

Among the dwellings featured was one on Old County Road, Crumlin, Dublin where 40 tenants shared rooms filled with bunk-beds, and two showers. There was mould on ceilings and walls, and a lack of an adequate escape route in the event of a fire.

In another property in Cobh, Co Cork, a tenant had been paying €125 per week before he stopped in protest at the conditions. Ceilings were damp and mouldy, there were holes in the floors, exposed sockets and no hot water. There were also mice on the property.

In Co Louth, one woman was in a rental property for nine years, where there was mould on numerous surfaces, rain coming through the roof and flowing down around ceiling lights, as well as mice on kitchen counter surfaces. Another property in Dublin had 60 tenants.

Robin Knox, a fire safety expert, described the conditions as “the worst” he had ever seen.

Though local authorities have a responsibility to inspect private rented properties, just 4 per cent of the 325,000 nationally were inspected last year, according to the programme.

Of those inspected, 69 per cent were not compliant with regulations, with a 100 per cent failure rate in four areas – Kilkenny, Louth, Offaly and Limerick.

A High Court challenge against RTÉ’s plans to air the programme was withdrawn yesterday. The action – which sought an injunction restraining the broadcast – was brought by the Green Effect Technology Limited T/a Global Academics, and its directors Jason Orr and Joshua Cantwell, against RTÉ and journalist Barry O’Kelly. It was opposed by RTÉ and O’Kelly.

Mr Justice Paul Gilligan, in agreeing to strike out the proceedings, said the public purse should not be put to any expense and awarded RTÉ its costs on the solicitor-client basis.

Speaking on the programme, Dr Aideen Hayden, chairwoman of Threshold, said bad housing conditions in some parts of the private rental market were “becoming significantly worse”.

“These are situations that should not be tolerated in a humane society and it is an absolute failure on our part as a people.”

The IPOA said the “so-called accommodation” featured could “only be described as hovels and must be weeded out as this behaviour is disgraceful, distressing and totally unacceptable for both tenants and landlords”.

“In no way can it be considered the norm for the private rental sector,” she said.

Separately, figures published by Sinn Féin’s housing spokesman, Eoin Ó Broin, indicate the number of households on housing waiting lists have increased by 9 per cent in the past year.

Using figures obtained from each local authority under the Freedom Of Information Acts Mr Ó Broin said there were now 99,555 eligible households waiting for council housing, up from 91,600 in September 2016.

The expectation was, he said, that numbers would have fallen in the past year, given that many of the 18,000 households housed under the Housing Assistance Payment (HAP) scheme in the past 12 months will have been removed from housing waiting lists.