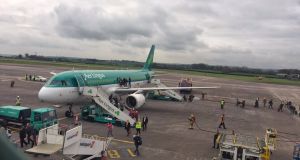 An Aer Lingus flight to London Heathrow had to return to Cork Airport and make an emergency landing after smoke filled the cockpit.

A spokesman for Cork Airport confirmed flight EI712 flew back to the airport shortly after take-off at 12.46pm on Thursday.

The aircraft, which was carrying 149 passengers, landed safely at 1.23pm and there were no injuries reported.

“A full activation of the airport’s emergency plan was deployed with Cork City and Cork County fire services as well as HSE ambulances turning out in support of the Cork Airport fire and police service,” the spokesman said.

Coastguards on the south coast were put on standby in the event that the plane had to land on water. Units of the fire service and local ambulances met the plane shortly after it touched down.

Emergency doors were opened and the slides to exit were used by some of the passengers.

A full technical investigation will be carried out and the air accident investigation unit has been notified. The airport remained open and the passengers were accommodated on subsequent flights from Cork to London Heathrow.

Passenger Barry O’Sullivan told Cork’s Red FM: “Once we got on to the ground the captain came on the tannoy to say ‘evacuate immediately please and leave bags after you’.”