More than 340 student beds planned beside 1960s tower, which will not be demolished 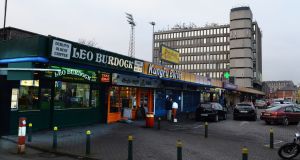 The plans propose an “upgrading” of the existing tower block instead of its demolition. The developers said they could not put forward a proposal to raze the office block because they do not own two of the businesses underneath it, a Tesco supermarket and an Eddie Rockets restaurant. Photograph: Cyril Byrne

The €50 million redevelopment of the 1960s Phibsborough shopping centre, including construction on part of the old grounds of Dalymount Park, has been granted planning permission by Dublin City Council.

The scheme involves a three-fold increase in the amount of retail space and the construction of apartments for 341 students in blocks ranging up to seven storeys.

However, the development will not include the demolition of the eight-storey 31m office tower, often cited as one of the ugliest buildings in the city.

The sites of the precast concrete clad shopping centre and the adjacent football stadium were to be combined under a 2008 city council plan to create a new “village centre” for the largely Victorian suburb of Phibsborough.

Bohemians football club had at the time planned to sell Dalymount and move to a green-field site close to Dublin Airport. However, the plan collapsed when the economy crashed, and the club got into severe financial difficulties.

The council bought Dalymount in 2015 from Bohemians football club for €3.8 million. It plans to build a new stadium and have Bohemians and Shelbourne FC as its tenants.

The shopping centre, which had been in the control of Nama, was bought last year for a sum reputed to be approximately €17 million by MM Capital, headed up by Derek Poppinga and Peter Leonard.

Apart from the eight-storey tower, most of the existing shopping centre is a single-storey strip mall, topped with car parking. The developers plan to build up the site with heights ranging from three to seven storeys, including new shops, offices, restaurants and student accommodation.

The student apartments will be in two blocks in four to six storeys, and will partly “overhang” this existing strip of shops facing on to Phibsborough Road.

The plans propose an “upgrading” of the existing tower block instead of its demolition. The developers said they could not put forward a proposal to raze the office block because they do not own two of the businesses underneath it, a Tesco supermarket and an Eddie Rockets restaurant. These, and a Tesco off-licence further down the block, will not be redeveloped under the plans.

The tower will, however, be clad with “expanded metal mesh” and existing roof-top antennae will be screened with the same material. The developers could, under the city development plan, have added an additional storey to the eight story block but have chosen not to.

A new civic space linking Phibsborough Road to the North Circular Road with access to Dalymount Park will also be created as part of the development, which, is expected to take two years to build.