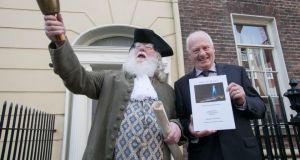 Having spent weeks pounding the pavements to get people to sign the petition to make Drogheda a city, Annie McGinley is unusually qualified to give a flavour of local sentiment. She says that “not one person” she has spoken to as she has gathered more than 3,000 signatures, in the newest phase of a decade-long campaign, has opposed city status for the Co Louth town.

McGinley, who comes from a dyed-in-the-wool Drogheda family on her mother’s side, speaks wistfully about the area’s municipal past – but her tone turns to outrage when conversation turns to the town’s recent history. “There’s a real anger in Drogheda that they’re being overlooked again,” she says, referring to the town’s absence from the Government’s draft National Planning Framework.

A few metres West Street, after McGinley has got several more enthusiastic signatures, an independent store owner named Kevin McAllister talks about the benefits that will come from city status – a subject that has featured frequently at the counter of his electrical-goods shop over the past five years.

It would make a great difference. Being a city would attract an awful lot more people into it

“It would make a great difference. Being a city would attract an awful lot more people into it,” he says. “You would be able to make a lot more bylaws yourself rather than relying on a council that’s not in the town.”

A report commissioned by the Drogheda City Status lobby group from the urban economist Dr Brian Hughes points out that the population of the greater Drogheda area has increased by almost 80 per cent in the past two decades, from 46,451 to 83,042 in the 2016 census. It says that the town and the villages of Laytown, Bettystown and Mornington, just over the county boundary in Meath, should become Ireland’s newest city.

Even if the Government sees things differently in the final version of Ireland 2040: Our Plan – and it may or may not – Drogheda’s future status remains unclear. Some have advocated for it to have a corporation-style council, like those in Dublin, Cork and Galway; McAllister argues that retaining income from rates for exclusive use in the local area can be only a good thing.

Emotions run high where its potential boundaries are concerned. Some in the nearby villages of Bettystown, Laytown and Mornington, which lie just over the county boundary in Meath, are eager to be included. Others fear that existing local identities will fall away inside a Drogheda City.

The Fine Gael TD Fergus O’Dowd is one of many local politicians to support the idea in principle. Despite the perceived snub in the National Planning Framework draft, O’Dowd says those behind the Drogheda City Status campaign must take account of territorial sensibilities if it is to be a success.

It’s not about emotion. The town needs to have its own identity. It’s hugely underperforming as it is

Rueful references to Drogheda’s secondary status behind Dundalk in the controversial National Spatial Strategy of 2002 still flavour the local sense of grievance. But the president of Drogheda & District chamber of commerce, Paddy Callaghan, dismisses any suggestion of one-upmanship between the regional rivals. “That’s nothing got to do with it, absolutely nothing got to do with it,” says Callaghan, the chairman of Nature’s Best, a family-run food business that employs more than 300 local people.

He is keen to promote the favourable development taxes that city status can bring Drogheda, along with greater appeal for tourists. “It’s not about emotion. The town needs to have its own identity. It’s hugely underperforming as it is, and has been so for a number of years. I think giving it city status will give it the potential to stand on its own two feet.”