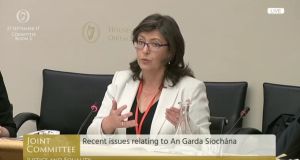 The head of the Policing Authority has said she is “troubled” by the suggestion that the process to fill the Garda commissioner vacancy might not begin for another 12 months.

Josephine Feehily said if the recruitment process was put on hold for a year, it would be at least another nine months after that before a new commissioner was in place.

A job description would need to be drawn up over a period of some three months, while the recruitment process itself would take another six months.

It would mean a replacement for Nóirín O’Sullivan, who retired earlier this month, would not be in place until June 2019. Dónall Ó Cualáin is serving as head of the force on an interim basis.

That projected outlook does not include any time for the Government to consider the final report of the Commission on the Future of Policing in Ireland, and to act on its recommendations, which are likely to be groundbreaking.

Garda sources said if the Government wanted to review the recommendations of the commission and act on them, it would likely take months, meaning a new commissioner might not be hired until 2020.

The commission itself has warned the changes required for the force are very significant, suggesting implementing them will not be a brief process. Such was the change it had in mind, it said, the job description for the new commissioner could not be drawn up now.

Ms Feehily has said while she understood the commission’s view on delaying the hiring of a new commissioner, its recommendation of a long delay was a concern.

“The idea of a lacuna troubles me,” Ms Feehily told the Joint Oireachtas Committee on Justice, in reference to stalling the search for a commissioner.

She said there was too much “ambiguity” in the legislation setting out how the Policing Authority recruited senior Garda officers, saying there was a different process for every rank.

On Tuesday it emerged the commission had said so much change was required within the Garda, and in the commissioner role itself, that a job description for the job could not even be drawn up at present.

Ms Feehily said she agreed with many of the concerns raised by the commission, including that possible candidates considering applying for the Garda commissioner’s job needed to know what the post involved and what form the Garda would take in the years to come.

She confirmed that while the authority would devise the process under which the new commissioner would be recruited, the Public Appointments Service would run the process, and she did not believe that arrangement was ideal.

However, the Policing Authority would remain involved with the panel of individuals who would interview the candidates. “We would expect to be significantly represented on such an interview panel,” she said.

Ms Feehily also said a long-awaited report from the Garda on mistakes in how homicides were recorded and counted in official records for over a decade had been lodged with the authority in recent days.