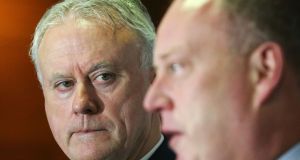 Minister for Justice Charlie Flanagan has said two years is “a long time” to wait before the next Garda commissioner is appointed.

Speaking in Dundalk at an annual cross-Border seminar on organised crime, the Minister said he also believed that the Policing Authority, the Government and the Commission on the Future of Policing in Ireland “can work towards an earlier timeframe”.

The Oireachtas Committee on Justice was told on Wednesday that the process of appointing a replacement for former commissioner Nóirín O’Sullivan could take up to two years.

Mr Flanagan said as the vacancy was at the “highest level” it was important the type of job description “that is deemed appropriate and necessary to take on the challenge that is the reform of the Garda,” is set out.

“I believe it is important, whatever process is set in place, we get the right person for the job.”

Asked about recent comments by the Garda Representative Association alleging there was pressure on its members to inflate breath-test figures, the Minister said he took them very seriously. “I felt the language was particularly strong, and I was disappointed with the content and tone.”

The Minister was addressing the 15th annual seminar which brings together senior officers from the Garda, the PSNI, the Revenue Commissioners, HM Revenue and Customs and government departments from both jurisdictions.

The meeting was also attended by acting Garda commissioner Dónall Ó Cualáin, who said he does not believe there was an implicit direction to gardaí to inflate breath-test figures.

In relation to the issue, he said “action” has been taken on foot of the report of the assistant commissioner Michael O’Sullivan.

Financial auditors Crowe Horwath have been selected by the Policing Authority to carry out a separate report into the issue. “We look forward to the Crowe Horwart report, and will study it very carefully when it does come out,” said Mr Ó Cualáin.

On the issue of Brexit, Mr Flanagan said that whatever transpires after Brexit, he wanted the close and “very strong” co-operation between the Garda and PSNI to continue.

He said the current relationship between the two forces “is at the highest and most positive ever, I want that to continue” .

The imposition of “what has been described as a hard border would give rise to a very, very serious challenge”.

He said any physical structure would act as a barrier to what has become a strong relationship in a wide number of areas on both sides of the Border, including security.

This was reiterated by PSNI chief constable George Hamilton, who warned that the more physical a border there was post-Brexit, the more opportunities there would be created for criminals and paramilitaries.

“Clearly the more infrastructure there is at the Border then the greater opportunities that that creates and potential targets that it creates for violent dissident republicans.

“Ultimately these are political decisions [and] with integrity we [the PSNI and the Garda] will give clear assessments of what the implications are for policing, for security and so on.

“Whilst we are doing some scenario planning privately to inform governments that ask, we do not want to get into public hypothesis that will just fuel the debate. We need to wait for the political leadership to tell us what the political agreements are, and then we can influence that and outline clearly what the policing and security consequences and implications are.”