Gardaí have announced that new evidence has lead to the opening of a murder inquiry into the deaths of Kerrie Ann Byrne (3), Mary Ellen Byrne (8) and Barbara Doyle (20), who died in a fire in Kilcock, Co. Kildare in 1987. Video: Mark Hilliard 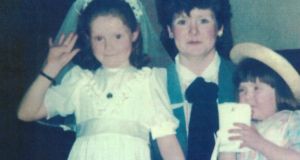 Gardaí have arrested a man over a triple homicide house fire 30 years ago in which two children and their aunt died.

The suspect has never come to the attention of the Garda and has no criminal convictions. The man lives with his family in Meath.

Ms Doyle was babysitting her nieces for her sister Elizabeth Byrne and her husband Aidan Byrne. They were at a local 21st birthday celebration at the time.

It emerged last week that the three deaths had been upgraded to homicides after a Garda cold case review.

The man was arrested by gardaí in north Co Dublin before 2pm on Tuesday. He was being held at Leixlip Garda Station under Section 4 of the Criminal Justice Act, 1984.

Gardaí are entitled to question him for a maximum of 24 hours without charge. He was expected to be held for the full period.

The Irish Times understands he was spoken to by the Garda after the fire but had an alibi. However, his alibi is now under scrutiny following the cold case review.

Sources said a new physical piece of evidence also links him to the scene on the night of the fire. He was known to at least one member of the Doyle family.

Detectives believe some form of accelerant was used to start the fire between 3am and 4am and that whoever was responsible banged on a neighbour’s door or window to raise the alarm.

Gardaí do not believe the person responsible intended to to kill the victims or to badly damage the house.

Instead they believe the fire was started as an act of vandalism because of a dispute with a member of the Doyle family. However, the fire burned out of control very quickly and killed the woman and her nieces.

Last week, gardaí said new evidence had come to light in the case. They did not comment on its nature but said the case had been elevated to a murder inquiry.

Although the case was never closed, it received additional attention in the last five years by members of the Garda Serious Crime Review Team which delves into cold case files.

Photographs from 1987 show the home cordoned off with a gutted roof, broken glass and fire-damaged walls. A report at the time said Elizabeth and Aidan Byrne had arrived home from the birthday celebration to find their home in flames.

The children and their aunt are buried together in a family plot at a local cemetery.

The home in Kilcock where the fire broke out is one of three houses in the quiet Church Lane area, near to an old cemetery and a local church. Aidan Byrne died in 2013 and his widow Elizabeth continues to live at the same address, which was rebuilt after the blaze.