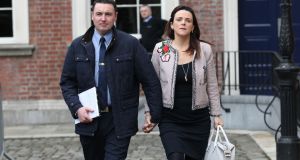 The partner of a Garda whistleblower who claimed he was subject to harassment and intimidation voluntarily left the home where she was living with him on three occasions, the Charleton tribunal heard on Thursday .

Hugh Hartnett SC said his instructions from his client, Marisa Simms, were that she was not thrown out but had voluntarily left the home at night “on approximately three occasions” after rows with Garda Keith Harrison.

Mr Hartnett said it was Ms Simms’s habit to go to her mother’s home after a row. He also said Ms Simms was not saying Garda Harrison had threatened to burn her or her children.

The tribunal heard from Ms Simms’s mother, Rita McDermott, who made a statement to gardaí­ in October 2013 reporting the alleged threats made by Garda Harrison.

She said this was what she had meant when she told a Garda investigator that she did say those things in a Garda statement in 2013. Mrs McDermott agreed that a lot of what she had said in her statement was not what she had witnessed herself, but information she was told second- or third-hand by her daughters.

The tribunal is looking into whether Garda whistleblower Sgt Maurice McCabe was the target of a smear campaign on the direction of senior Garda management. The Garda Harrison allegation is that there were inappropriate contacts between Tusla and the Garda in relation to matters to do with Garda Harrison and Ms Simms. He has said these mirrored in some regards what allegedly happened with Sgt McCabe.

Mrs McDermott said that when she first approached Sgt David Durkin about Garda Harrison, it was because she hoped he might get some form of counselling. She agreed she had not mentioned counselling to Sgt Durkin, she “just asked to have a word with him”.

Mrs McDermott said her attitude to Garda Harrison had changed since 2013. She said that since he had gone on sick leave he was taking care of both his own and Ms Simms’s children from her previous marriage.

Earlier the tribunal was told that a report sent by Donegal gardaí to the Garda Síochána Ombudsman Commission (Gsoc) outlining alleged threats Garda Harrison made to Ms Simms , was not an official complaint.

Mark Harty SC, who represents Garda Harrison, told the tribunal that the correspondence did not constitute a complaint as defined in the Garda Síochána Act.

Mr O’Doherty said the Garda Síochána took the view it was a complaint, but they contacted the complainant to confirm they wished to make a complaint.

When Mr O’Doherty contacted Ms Simms she first told him she wanted to think about it, and then called back later to say she did not want a Gsoc investigation.

“It fell at hurdle one. The complaint was not made by, or was not authorised by Ms Simms,” Mr Harty said.