Hard to believe what happened not known about throughout Garda, says watchdog 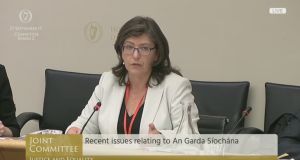 It was very unlikely evidence would be found to prove senior Garda officers ordered or directed members of the force to inflate alcohol breath testing data, the head of the Policing Authority, Josephine Feehily, has said.

It is “unlikely” that evidence will be discovered to prove a claim that senior gardaí forced officers to inflate breath-testing data, Policing Authority chair Josephine Feehily has said.

She added, however, that she believed the scenario could change if the Garda Representative Association (GRA) backed up its allegation that managers pressured rank-and-file gardaí to inflate the data. An internal Garda report found the test figures had been exaggerated by 1.45 million over seven years.

The GRA, which represents around 10,500 gardaí in the 13,000-strong force, two weeks ago claimed that because its members were working under duress, they could not be held responsible for the disparity.

It alleged senior officers were chasing targets to aid their chances of promotion, and had put pressure on officers to record high testing numbers irrespective of the number of tests actually carried out.

Ms Feehily told the joint Oireachtas Committee on Justice that a review of the breath-testing debacle being carried out for it by consultants Crowe Horwath was not unearthing any evidence to support what the GRA had claimed.

“They’re likely to report to us that there was an implicit expectation in relation to breath tests rather than an explicit direction,” she said.

However, given the level of inflation taking place, she said it was hard to believe that what was going on was not known about throughout the organisation.

Committee chair Caoimhghín Ó Caoláin TD (SF) said there would be “incredulity” if the conclusion arrived at was that there were no direct orders or directive given to inflate the data.

Ms Feehily said she had been “particularly concerned about the remarks of the GRA”.

“At one level, when I heard them my reaction was, ‘it’s a pity they didn’t say this sooner’ because there was an inherent admission about the numbers,” she said. “[IT] would have advanced us all a couple of months if we’d had an admission; whatever about the context.

Ms Feehily added she was still hopeful the GRA would meet Crowe Horwath and provide evidence of its allegations.

The GRA declined to comment on Wednesday, saying it would await the final report by Crowe Horwath before making any further statements.

Ms Feehily said the inflating of the tests was “a serious integrity issue”, and that the authority had already expressed its “serious alarm and dismay” about the debacle. It had affected public confidence in the Garda, and she said she was struck by way the controversy had resonated so deeply with the public.

Ms Feehily said she believed the fact such significantly inflated testing data was created by the Garda revealed gaps in the capacity of its management.

“I have a sense that [the Garda] is not an organisation that looks at numbers and says ‘if we’re doing that many breath tests, and we have this many guards and there’s only this many people with [driving] licences...’. I don’t think they think like that; and that’s the managerial capacity point.

“So I suspect we will be getting indications from Crowe Horwath of a belief throughout the organisation that certain performance was expected, but I think they will find they’re unlikely, I think, to find a directive or a direction.”