Marisa Simms made series of allegations about her partner, Garda Keith Harrison 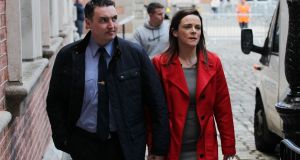 A Garda inspector has denied forcing a witness to make a statement against her partner, Garda whistleblower Keith Harrison.

The tribunal is looking into whether garda whistleblower Sgt Maurice McCabe was the target of a smear campaign on the direction of senior Garda management. The Garda Harrison allegation is that there were inappropriate contacts between Tusla and the Garda in relation to matters to do with Garda Harrison and Ms Simms. He has said these mirrored in some regards what allegedly happened with Sgt McCabe.

On October 6th, 2013, Ms Simms made a lengthy statement in Letterkenny Garda station to Insp Sheridan and Sergeant Brigid McGowan.

In the statement, Ms Simms outlined her relationship with Garda Harrison.

Mr Hartnett said the inspector “set out as best you could to get a statement using the wiles of an investigating officer”.

Insp Sheridan said her job was “to talk to her and ask if she wants to make a statement”.

“I’m not going to force her to sit down and make a statement,” said Insp Sheridan.

She said that “very, very serious allegations” had been made about Garda Harrison by third parties - Ms Simms’ mother, sister, uncle and a cousin - who had already come forward to gardaí­.

Mr Hartnett said that Ms Simms was “exhausted” and “dead tired” at the end of the statement, which was made over an eight-hour period.

Mr Hartnett said this was an “exceptional length of time” to take a statement.

“Even the best of Donegal seanachaí’s would find it difficult to talk in a stream for eight hours or more,” Mr Hartnett said, referring to traditional storytellers.

She said that Ms Simms was “alert and knew what she was doing”.

Insp Sheridan said that there had been a general conversation for two or three hours with Ms Simms, following which she made the statement.

Insp Sheridan said her “key concern” was the welfare of Ms Simms’ children.