Partner of whistleblower has no issue with Tusla, tribunal hears 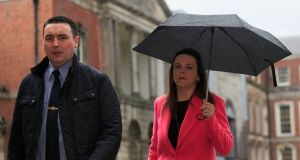 The partner of a Garda whistleblower accepts there is no basis for believing gardaí­ manipulated Tusla into investigating her family and children, the Charleton Tribunal has heard.

shortly after she withdrew a statement making complaints against her partner, Garda Keith Harrison, in January 2014.

The tribunal is examining whether Garda whistleblower Sgt Maurice McCabe was the target of a smear campaign on the direction of senior Garda management.

It is also investigating allegations that there were inappropriate contacts between Tusla, which was formerly part of the Health Service Executive, and the Garda in relation to matters to do with Garda Harrison and Ms Simms. Garda Harrison has said these mirrored in some regards what allegedly happened with Sgt McCabe.

“I have no issue with Tusla or the HSE,” Ms Simms said. “I suppose I was suspicious. I had retracted my statement, and a week and a half later I get a letter.

“I have absolutely no issue with Tusla, they had received a referral. The people we were dealing with were professional, they were courteous.”

Barrister Paul Anthony McDermott SC, representing Tusla, said it was his understanding that the reason for the current module was to examine allegations against his client, “and it appears it is no longer being pursued”.

Ms Simms said that when she was withdrawing her complaint, Insp Goretti Sheridan of Letterkenny Garda station told her a story about a couple who had had a row, as a result of which social services had become involved in their lives and their children had been “taken away”.

“As a mother I will never forget what she said to me. I felt sick to my stomach,” Ms Simms said.

She also said that Sgt Brigid McGowan told her to “think of her children” when she was making her statement about Garda Harrison in October 2013.

Ms Simms said that when withdrawing her statement on January 11th, 2014, she affirmed that everything in it was true because Insp Sheridan “was after making a threat to me about social services” and she wanted to protect her children.

Barrister Desmond Dockery, representing the Association of Garda Sergeants and Inspectors, Insp Sheridan and Sgt McGowan, said it was Sgt McGowan’s position that she had never told Ms Simms to “think of her children”. He also said Insp Sheridan had never told a story about a local couple and social services. Ms Simms maintained she had been told these things.

Mr Dockery said his clients had to put up with very damaging allegations and a Garda Síochána Ombudsman Commission inquiry following a 2016 complaint by Ms Simms.

Ms Simms was asked by Mícheál P O’Higgins SC, on behalf of the Garda Commissioner, if it was “entirely reasonable for the guards to notify the HSE and to take seriously what you had told them in your statement”.

“If you were just reading all the information, without the context around it, they had to take it seriously, yes,” Ms Simms said.