Families of victims of the Bloody Sunday killings have expressed both disappointment and relief at the news that one former British soldier is to be charged following an announcement by the North’s Public Prosecution Service. Video: Reuters 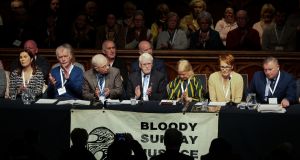 “I was going to say good morning,” said John Kelly (centre), “but I don’t think it is.” Above, chairing the Bloody Sunday families’ press conference in the Guildhall in Derry on March 14th, following the announcement that a former British soldier will be charged with murder over the killings in 1972. Photograph: Paul Faith/ AFP/Getty Images

Nine years ago, the relatives of those killed on Bloody Sunday stood on the steps of Derry’s Guildhall and smiled; yesterday, the disappointment was etched on their faces.

An hour before, they had been told by the North’s Public Prosecution Service (PPS) that a single soldier will face prosecution in connection with the deaths of their loved ones on January 30th 1972; the PPS had been considering charges against 17 former soldiers in relation to 14 deaths.

As the families arrived to give a press conference, some were visibly upset.

There were cheers nonetheless, from members of the public keen to demonstrate Derry’s support for Bloody Sunday families. As they entered the Guildhall, there was many a comforting pat on the arm as well as a handshake from the city’s mayor.

The prosecution was a 'vindication' of the family’s campaign; 'Justice for one is justice for all. Their victory is our victory.”

Hopes had been high – the Saville report into the killings, in 2010, had found that none of the marchers were posing a threat when they were shot.

Soldier F – who is to be prosecuted in connection with the death of two of the victims, William McKinney and James Wray – had been named as responsible for four deaths.

In the weeks leading up to the PPS’s decision, Saville’s findings were cited over and over again in Derry – findings such as that in relation to 17-year-old Michael Kelly, who Saville said he was “sure” had been mortally injured by a shot fired by Soldier F.

His brother John, now 70, yesterday asked for a minute’s silence in memory of the victims. He stared straight ahead, determined to remain unbowed; for a few moments, his strength wavered, and his head dipped, overcome with emotion.

Kelly’s wish had been to see all 17 soldiers charged with murder.

He was “terribly disappointed”, he said, that only a single soldier was to be prosecuted, but found it a “consolation” that at least six families – those of William McKinney and James Wray, and four of the wounded – had received the news that he himself had been hoping for.

The prosecution was a “vindication” of the family’s campaign; “justice for one is justice for all,” he said. “Their victory is our victory.”

'I’ll have to try and accept the fact that it’s done, the result didn’t go the way I had anticipated... I’m to withdraw for a while and mend my heart'

Choking back tears, Leo Young – whose 17-year-old brother John was also among the victims of Bloody Sunday – said he was “devastated”.

“It’s the most horrific blow I’ve had since he was shot. It’s as bad as the day John died.”

He now believes his brother’s murder will never be redressed.

“I’ll have to try and accept the fact that it’s done, the result didn’t go the way I had anticipated, and I’ll just have to accept it.

“I’m to withdraw for a while and mend my heart a wee while.”

The families have already said they will consider appealing the PPS’s decision; solicitor for the families, Ciaran Shields, said they would give “detailed consideration” to the “reasons provided for decisions not to prosecute the other soldiers, with a view to making further submissions to the prosecution service.

“We shall ultimately challenge in the High Court, by way of judicial review, any prosecutorial decision that does not withstand scrutiny.”

“This is not the end of it,” said John Kelly. “We will continue on and hopefully bring the rest of the perpetrators to justice.

“The Bloody Sunday families are not finished yet”.

For the Wray and McKinney families, they will now wait to see Soldier F charged; for William McKinney’s brother Mickey, their news had been tinged with “bitter disappointment”.

“I can’t say I have a sense of joy because I’m not happy with the decision with the rest of the families,” he said.

Among those other families are the Duddys. Kay Duddy’s younger brother Jackie was the first to die on Bloody Sunday; the photograph of Fr Daly waving a white handkerchief as he tried to escort the dying teenager to safety became the iconic image of the day.

Lord Saville found he had “probably” been shot by Soldier R; the PPS said the test for prosecution had not been met with regard to any of the soldiers in the area at the time Duddy was shot.

Kay Duddy brought the handkerchief of Fr – later Bishop – Daly with her for every day of the Saville Inquiry. It is now held safely in the Museum of Free Derry. She made sure she paid it a visit.

Cradling the handkerchief, she struggled to come to terms with the news. “I think I’m still in a wee bit of shock, but it is starting to sink in.

“I’m delighted for the Wray and McKinney families, and the four wounded. At least they’ll have their day in court, which is amazing.

“I’m just disappointed for the Duddy family that we won’t, but at this point in time that’s how it is, and we can’t change that.”

Bishop Daly, she believes, would have found the day “sad, so sad.”

“I carried one of Bishop Daly’s photographs in my bag today because I thought, you can’t be with us in body but you can be with us in spirit.

“He would have been devastated for the rest of us, but delighted for the McKinney and Wray families.”

Yet in the midst of their disappointment, there was praise for the Bloody Sunday families; as the former Foyle MP Mark Durkan put it, “the dignity and the determination that’s been shown by the families in a day of what must be acute disappointment.”

“It’s a day of disappointment for the city, but we have to rise above that and emulate the dignity that the families showed,” he said.

Denis Bradley – the former deputy chairman of the North’s Policing Board, who was present on Bloody Sunday – said the dignity they showed in front of the world’s media was an example to everyone.

“You can be proud of this town on some days,” he said, “and this is one of those days”.