‘No soldier should be charged,’ say British veterans

Soldier F, who faces charges over Bloody Sunday shootings, is ‘one soldier too many’ 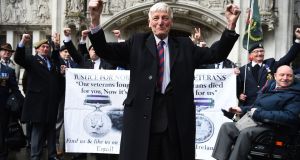 British veterans have said the ex-paratrooper being prosecuted over the Bloody Sunday shootings is “one soldier too many”.

Known as Soldier F, he will face charges for the murders of James Wray and William McKinney and the attempted murders of Joseph Friel, Michael Quinn, Joe Mahon and Patrick O’Donnell in Derry in 1972.

Sixteen other veterans and two ex-members of the Official IRA, all of whom were investigated, will not face prosecution.

But former Grenadier Guard Alan Barry, who founded the Justice for Northern Ireland Veterans group, said Soldier F was being thrown “under a bus”.

The 54-year-old, who served in Northern Ireland in the 1980s, said: “It’s very one-sided. No soldier should be charged. It happened 47 years ago, a line in the sand needs to be drawn and people need to move on.

“Under the terms of the Good Friday Agreement, veterans are being left open to prosecution while terrorists have been cleansed of their past crimes.

“It’s all about appeasement: appeasing the IRA, appeasing Sinn Féin, and if that means throwing one or two veterans under a bus then that’s what they’ll do.”

He was speaking outside the Supreme Court in London on Thursday, where about 40 supporters of former soldier Dennis Hutchings (77) had gathered.

Conservative MP and former British Army officer Johnny Mercer tweeted it was “ironic that Dennis is back in court today”, adding it was “a genuine disgrace and stain on this nation that this process continues”.

Mr Mercer also tweeted that the Bloody Sunday charges brought against Soldier F were the result of “an abject failure to govern and legislate, on our watch as a Conservative administration”.

“When I speak of a chasm between those who serve and their political masters in this country, I mean this,” he added.

One banner outside the Supreme Court read: “Our veterans fought for you, our veterans died for you, now it’s your chance to fight for us” while another urged “stop the witch-hunt now” – an expression used by several supporters.

Former Coldstream Guardsman Vern Tilbury (58) accused the country of “spitting on” its veterans and said the government looked upon former soldiers as “collateral damage”.

Ex-Artillery Sgt Maurice Durward (78), who spent 22 years in the army, said he would not encourage his grandson to sign up because of the “betrayal of politicians”.

Mr Williamson said the ministry of defence (MoD) was working to “drive through a new package of safeguards to ensure our armed forces are not unfairly treated”.

He added: “And the government will urgently reform the system for dealing with legacy issues. Our serving and former personnel cannot live in constant fear of prosecution.”

The issue of a future amnesty for veterans remains an issue of intense controversy in Northern Ireland.

Last year, the government angered some of its own backbenchers and Mr Williamson when it did not include a statute of limitations on prosecutions of ex-service personnel among proposals for dealing with Northern Ireland’s toxic past.

Northern Ireland secretary Karen Bradley said such a measure would be unacceptable, because it would also have to cover terror suspects accused of historic crimes.

The prospect of a statute of limitations met with vocal opposition in Northern Ireland.

Both Sinn Féin and the DUP voiced concern, as did the Irish Government and the families of victims.

The DUP and some military veterans in Northern Ireland made the point that any such statute would, by law, have to be extended to also cover former paramilitaries – something they branded unacceptable. – PA