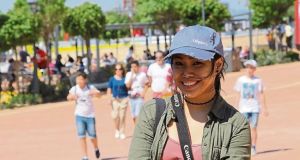 Denisse Dasco (20) died on April 21st, 2017, after complaining of a terrible pain in her lower back the previous night.

Staff at a Cork hospital would not do anything differently in their treatment of a 20-year-old student whose sudden death in the hospital’s emergency department remains a mystery, an inquest has heard.

Consultant in Emergency Medicine Dr Adrian Murphy told the inquest into the death of Denisse Dasco that he had reviewed all the medical notes relating to her admission and treatment at the emergency department at the Mercy University Hospital and could see no failing in her care.

“I have reviewed all the notes and records in this case and I can think of nothing I would do differently to change the trajectory of the outcome which has been devastating and tragic beyond words for Ms Dasco’s family,” Dr Murphy told Cork City Coroner’s Court.

The inquest heard evidence from Assistant State Pathologist Dr Margaret Bolster that she had enlisted the assistance of several experts in various areas of pathology including world autopsy expert Prof Sebastian Lucas to review the case but none could give a definite cause of death.

Dr Bolster said that Prof Lucas suggested a cardiac arrhythmia after ruling out a pulmonary embolism or clot and while both were possibilities as was toxic sudden death syndrome, it was impossible to ascertain what exactly caused the death of the forensic science student.

The inquest heard how Ms Dasco texted a friend at 6.35am on April 21st, 2017, complaining of a terrible pain in her lower back which was triggered when she went to pick up something from the floor the previous night.

She was taken by ambulance to the hospital where she was triaged as Category Yellow to be seen within 60 minutes. Senior house officer Dr Eoin Moriarty initially thought she might have a torn gluteal muscle or a problem with a slipped disc and she was later admitted to the hospital.

Dr Moriarty requested further radiological examination as he feared Ms Dasco might have been suffering from a pulmonary embolism or deep vein thrombosis after a recent two-hour flight from Spain but the scans showed she had not.

She was given painkillers which seemed to help but later that night her condition began to deteriorate. She was scored at nine on the National Early Warning Score system at 8.30pm when her oxygen saturation level dropped to 88 per cent so she was given oxygen to bring it back to 95 per cent.

Her score on the News system, which runs from 0-21 and requires the most senior emergency staff be alerted at seven, dropped back to six but at 9.45pm, she began to deteriorate, coughing blood and lost consciousness and was moved to a resuscitation room after suffering a cardiac arrest at 10pm.

Consultant anaesthetist Dr Karl Knapman was summoned and he supervised CPR on Ms Dasco but after 40 minutes of attempted resuscitation, she failed to respond and he pronounced her dead at 10.40pm – about 12 hours after she was first admitted to the hospital.

Reviewing Ms Dasco’s medical notes, Dr Murphy said he had never come across a case like it in 15 years of clinical practice and her sudden deterioration marked by dizziness, breathlessness and coughing blood was “entirely unforeseen, unexpected and unanticipated” by medical staff.

Dr Bolster said it was “a complex case” so she consulted multiple experts in various areas of pathology including neuropathology, cardiac, bone marrow and renal and while there was no evidence of a clot at autopsy, the cause of death could not be ascertained

Cork City Coroner Philip Comyn returned an open verdict and extended his sympathies to Ms Dasco’s family, saying that it was a particularly tragic case for someone so young and healthy to die so suddenly, and unfortunately, they were no wiser as to why she had died.

Senior counsel for the hospital, Simon Mills SC, extended the hospital’s sympathy to Ms Dasco’s family and he wanted to reassure them that “everything was done during her time in the hospital” to save her life.

Barrister for Ms Dasco’s family Colmán Ó Donnchadha said her family, including her parents, Carlos and Mary, were appealing for privacy and would not be issuing any statement to the media following the inquest.

1 RTÉ receives complaint from union after ‘issue’ with spokeswoman’s accent
2 Fianna Fáil election candidate was disqualified from being company director
3 Clontarf tenant says her garden was ‘destroyed’ without warning by Irish Rail
4 RTÉ will not include Sinn Féin in second TV debate despite legal threat
5 Election 2020: Fine Gael and Fianna Fáil set to reveal spending plans worth billions
Real news has value SUBSCRIBE