Fitzgerald took ‘conscious decision’ not to act on McCabe email 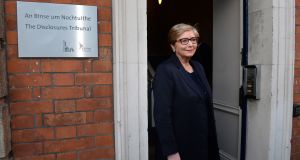 The former tánaiste and minister for justice Frances Fitzgerald has said she made a “conscious decision” not to act on foot of an email she received in 2015 about matters affecting Sgt Maurice McCabe at the O’Higgins Commission.

Ms Fitzgerald was giving evidence at the Charleton tribunal about an email she received in May 2015 which disclosed that a row had broken out at the commission hearings, which were being held in private.

Late last year the Government came close to collapse, and Ms Fitzgerald resigned from Cabinet after the existence of the email was disclosed.

Ms Fitzgerald has said in the Dáil and in a statement submitted to the tribunal that though she accepts she read the email, she does not remember doing so.

The email informed her that counsel at the commission for the then Garda commissioner Nóirín O’Sullivan had raised “as an issue” a criminal complaint that had been made against Sgt McCabe. The email was “for her information” and said that she had no function in the matter.

Questioned about the email by Diarmuid McGuinness SC, for the tribunal, Ms Fitzgerald said she did not think she should have started to “investigate” the matter and that the email had not set off any “alarm bells”. She did not have any detail as to what was happening at the commission’s confidential hearings.

She did not agree with the suggestion that the email disclosed to her the strategy being adopted at the commission hearings by the Garda commissioner’s legal team, in relation to Sgt McCabe.

Asked if she should not have consulted her advisers about the matter, she said: “I made a conscious decision, obviously, to not interfere in the commission of investigation in any way. I would have considered it inappropriate.”

She also said she took “a conscious decision” that the chairman of the commission, Mr Justice Kevin O’Higgins, would deal with the issue.

In the meantime, she said, she was involved in “lots of other work” on how whistleblowers should be dealt with.

Asked if she considered discussing the matter with Ms O’Sullivan, Ms Fitzgerald said no.

The tribunal heard that Ms Fitzgerald had multiple dealings with issues to do with Sgt McCabe in the period after she took on the role of minister for justice in May 2014. At one stage Sgt McCabe forwarded to her email correspondence he had with Ms O’Sullivan in which he said he was subject to “day-to-day abuse” in his work as a Garda in Mullingar.

In March 2015, following some initiatives, Sgt McCabe wrote to Ms Fitzgerald to thank her, saying “for the first time in years I am happy going to work”.

The criminal complaint referred to in the May 2015 email was an accusation of sexual abuse levelled against Sgt McCabe in 2006 which the Director of Public Prosecutions decided, even if it was true, would not constitute a crime.

Ms Fitzgerald knew the details of the allegation and its context as a result of matters she had to deal with during 2014 and 2015 in her role as a minister. She knew that a decision had been made, following a complaint by Sgt McCabe’s accuser that her allegation had not been properly investigated, not to include the case in the terms of reference of the commission. This was decided after a review came to the conclusion that the Garda investigation had been properly conducted.

The tribunal is investigating whether Ms O’Sullivan used unjustified grounds to try discredit Sgt McCabe at the commission. Ms Fitzgerald continues her evidence on Thursday.