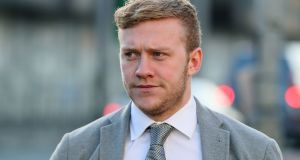 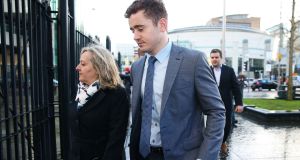 A woman who alleged that she was raped by Ireland and Ulster rugby players Paddy Jackson and Stuart Olding texted friends that she would “look like a stupid little girl” if she reported it to police, a court has heard.

Belfast Crown Court again heard on Thursday about the texts which the witness exchanged with her friends the morning after the alleged attack, where she initially did not want to go to the police.

In one she said: “No, I do not want to get the police involved. You know how that will turn out, It’s my word against theirs. Ulster Rugby will vouch for their good character and I’ll just look like a stupid little girl.”

She also told court she did not leave out “on purpose” elements of the assault in her initial reporting of the alleged attack.

The 21-year-old student, who alleges she was raped at the east Belfast home of Mr Jackson on June 28th, 2016, faced her first day of cross-examination at the court on Thursday.

During the hearing, the complainant was being cross-examined by Brendan Kelly, QC, representing Mr Jackson.

The complainant alleges that during the party she was raped by Mr Jackson and that Stuart Olding forced her to perform oral sex on him.

Mr Kelly asked why, on the morning after the alleged assault when she confided in two female friends and one male friend that she had been raped, she did not mention the alleged oral rape.

He also asked why in exchanged texts she did not mention that during the alleged rape another woman who was at the party looked into the room.

In regard to not initially mentioning the alleged forced oral sex to her friends, the witness said she did not feel she had to “explain every single demeaning thing that I had been through”.

“I did not leave it out on purpose; I just did not think it had been relevant,” she said.

Asked was it because her friends might not believe her, she replied: “Not at all.”

Regarding not telling them about a woman looking into the room during the alleged assault she said that at the stage the woman had “missed the moment that those men crossed the line”.

She said the woman did not witness “their blatant disregard” for her and the fact she did not want to have sex with them.

The witness said she did not provide her friends in those exchanged texts with a “blow by blow” account of what happened.

Mr Kelly also questioned the complainant about how, on June 28th, she went to the Brook sexual health clinic in Belfast and later to the Rowan sexual assault referral centre in Antrim to be examined.

Asked why she did not mention the alleged forced oral sex at those examinations she said at that stage she “did not think oral sex constituted as rape”.

She said it should be remembered that she did not get home until 5.15am that morning, she had not slept as she had been tossing and turning and she then had to face questions about her alleged ordeal.

She agreed that her account was “not as complete as it could be” but repeated she had not left out details “on purpose”.

She said Mr Kelly may be making out the omission to be sinister but it did not happen on purpose. “All I wanted to do was to get in there and get out,” she said of the medical examination at the Rowan centre.

They all deny the charges, with Mr Jackson and Mr Olding contending that the sex was consensual.

During Thursday’s hearing Judge Patricia Smyth also said there had been some inaccuracies in the press reporting of the case.

She told the jury not to be influenced by anything reported, or on social media or anything said to them. She also said they must beware of what she described as “fireside” lawyers who did not know anything about the case but “are very quick to express an opinion”.

On Thursday afternoon Mr Kelly played a videoed interview that police conducted with the complainant on June 30th, 2016 where she recounted the night and early morning of the alleged rape at Mr Jackson’s home.

In that interview with a woman PSNI officer, she spoke about going to Ollie’s nightclub in central Belfast on the night of June 27th, 2016 and how early on the morning of June 28th she went to the party at the house in east Belfast.

“I was trying to block everything out and pretend it wasn’t happening,” she said in that interview about the alleged assault. “I was there but I was trying to tell myself I wasn’t. I was trying to make myself external to the situation if that makes any sense.”

She also repeated how she decided to go home after the mood “shifted” at the party and how when she went to Mr Jackson’s bedroom, the alleged rapes took place.

She told the officer during the interview that she was still in pain and still bleeding after the alleged rapes.

The complainant when questioned again by Mr Kelly after the recording ended said that in that police interview she had not mentioned about the woman who entered the room while the alleged sexual assaults were taking place.

The witness said that it was later when she was being driven home by a friend from the interview she realised she had more to tell police.

She was not sure whether she specifically told her friend a woman had witnessed the alleged assault or whether she said there was something non-specific she had to tell police.

Mr Kelly asked why it took three further weeks before that second interview with the PSNI was conducted. The witness said she did not know why.

The trial continues on Friday.