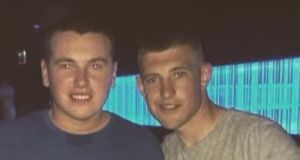 Murder victims Sean Little (22) and Jordan Davis (23), killed in separate shootings less than 24 hours apart in Dublin, were close friends and both knew their lives were in danger.

The murder of Mr Davis in Darndale is believed to be drug-related and was possibly linked to an unpaid drugs debt, though gardaí were keeping an open mind.

He had only posted a tribute to his friend Mr Little on social media minutes before being shot dead himself; posting a photograph of them together.

“Rest in paradise, you were a gent,” Mr Davis wrote of Mr Little on Facebook. Less than 15 minutes later he had been shot dead himself.

Detectives believe the murder of Mr Little late on Tuesday night in north Co Dublin was linked to the killing of Zach Parker earlier this year.

In January Mr Parker (23) was shot dead outside a gym in Swords, north Co Dublin, over a drugs debt owed to a gang based in Finglas, north Dublin.

One line of inquiry into the murder of Mr Little is that the same gang killed him because they feared he wanted to avenge his friend Mr Parker’s death.

Mr Little, from Kilbarron Ave, Kilbarrack, north Dublin, was shot dead on a back road that leads from Walshestown in north Co Dublin to the M1.

Garda sources said he had been wearing a bulletproof vest when previously stopped for searching. However, he was not wearing such a vest when he was killed.

Mr Little, who had no criminal convictions, was at odds with the Finglas gang leader who murdered his friend Mr Parker, and gardaí believe he was shot as a result of that.

Mr Little was also closely associated with junior members of the Kinahan cartel in Dublin and was linked to men involved in a suspected gangland shooting in Donaghmede, north Dublin, last week.

Wednesday’s murder victim, Mr Davis, had only become a father four months ago and was wheeling the child in a buggy when he was killed. He was gunned down outside Our Lady Immaculate Junior National School and the Church of Our Lady Immaculate, Darndale.

He was a relation of Jamie Tighe Ennis (24), who was shot dead 18 months ago on Moatview, about 1km from Wednesday’s murder scene.

Mr Davis knew his life was in danger and while a link to the drugs trade is suspected for his murder, it may take some time before a definite motive is arrived at.

Gardaí in Coolock, north Dublin, are investigating the murder of Mr Davis. The murder inquiry into the shooting dead of Mr Little was being conducted by Balbriggan gardaí.