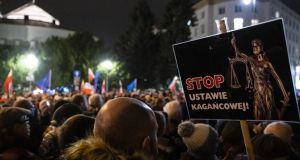 Protesters rallied in support of the Polish judiciary in December 2019. Judges from across Europe will take part in a silent protest in Warsaw on January 11th. Photograph: Krystian Dobuszynski/NurPhoto via Getty

The body representing Irish judges will condemn the Polish government’s “unrelenting threats” to judicial independence in a strongly worded letter to be delivered to their colleagues in Warsaw.

Supreme Court judge Mr Justice John MacMenamin will represent the Association of Judges of Ireland (AJI) at a silent protest march in Poland’s capital city on Saturday alongside dozens of judges from other European countries.

It will mark the first time the AJI has taken part in a protest either in Ireland or abroad.

In a letter which will be delivered by Mr Justice MacMenamin to Iustitia, the Polish judges’ association, this weekend, AJI president Mr Justice David Barniville states its participation in the event is “entirely consistent” with its aims and objectives.

“Among the aims and objectives of the AJI, which are set out in its constitution, are to promote the independence of the judiciary and to promote and maintain contacts with judges and magistrates abroad and with national and international associations of judges,” the association states.

The AJI states it is pleased to accept the invitation to participate to take part in the silent march “in solidarity with our judicial colleagues in Poland and in defence of judicial independence and the rule of law.”

The judges will march in full judicial garb in protest against a series of measures introduced by the populist Law and Justice party (PiS) granting the government greater control over the selection and discipline of the judiciary.

The Polish government has taken greater control of the appointment of judges and has been accused of bringing spurious disciplinary action against judges who criticise the reforms. It has also been accused of purging critical judges from the bench by lowering the retirement age, a move which was condemned internationally.

In 2018 an Irish High Court judge temporarily delayed the extradition of a Polish man accused of drug trafficking over concerns about the impact of the reforms on the rule of law in Poland.

The participation of Irish judges in the protest is “unprecedented”, barrister Tony McGillicuddy told The Irish Timesearlier this week.

“I can’t think of an Irish judicial figure ever participating in a march or protest before. I think they would likely not want it to be seen as an overtly political statement but one of solidarity with fellow judges.”

Iustitia said in a statement it wants to “strongly emphasize that the march is apolitical.

“It is not an affirmation of any political force in the country, nor is it intended to criticise the actions of any particular political party.

“Its sole purpose is to make the legislative authority aware of the dramatic consequences of the entry into force of laws passed in Parliament and of repressive measures taken against representatives of the judiciary in Poland.”