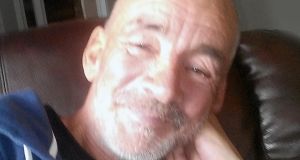 Gardaí in Cork have formally begun a murder inquiry after a postmortem examination confirmed that a homeless man whose dismembered body was found in the grounds of a derelict house in the city had died a violent death.

The results of the postmortem on the body of Francis Dunne (64), originally from Churchfield on the city’s northside, have not been released for operational reason but it is understood he had suffered severe head injuries.

Gardaí had to use Mr Dunne’s fingerprints, which had been held on file, to formally identify him such were the extensive nature of injuries to his face and his head as a result of a violent and sustained assault.

Mr Dunne’s body was then dismembered with his head and arms being severed from his torso which was found in the grounds of a house on Boreenamanna Road.

Gardaí were alerted to the grim discovery at around 4pm on Saturday when a local man went searching for his cat in the grounds of 19th century Castlegreina House and found the naked, headless remains of a man under a bush.

Investigators would not comment on Sunday on whether they believed Mr Dunne was murdered in the grounds of Castlegreina House or whether his killer or killers brought his body there to dispose of him.

Gardaí have appealed to the public for assistance and have asked anyone who noticed anything suspicious at Castlegreina House since Christmas Day to contact them at the Bridewell Garda Station on 021-4943330.

Det Supt Mick Comyns of Anglesea Street Garda station stressed members of the homeless community had nothing to fear if they contacted gardaí with information. And he moved to reassure local people that the general area was properly policed.

He said gardaí had received complaints some months back about people drinking in the grounds of the house but they were dealt with by gardaí and the area had been quiet in more recent times.

Gardaí began door-to-door inquiries in the Boreenmanna Road and the nearby Rockboro Avenue area and they have also begun harvesting CCTV footage from the area.

The killing is the second violent death suffered by a homeless man in Cork in the space of three months. Timmy Hourihane (53), a chef originally from Bantry in west Cork, died in hospital after being assaulted in the Mardyke on October 13th.