Who was ‘Dublin Jimmy’? Chief suspect in Lunney kidnapping a storied villain 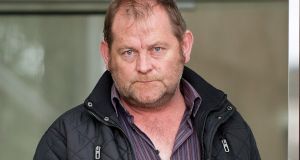 Cyril McGuinness had become public enemy number one for the Garda and PSNI in recent weeks after a fresh death threat was issued against Quinn Industrial Holdings executives.

Those threats, in a statement given to the Irish News newspaper, came when both police forces were under extreme pressure to catch the gang that tortured QIH chief operations officer Kevin Lunney after they had abducted him from outside his home in Fermanagh in September.

The QIH executives have always believed the gang attacking and intimidating them may have been led by McGuinness, but that the campaign of violence had been funded by and carried out at the behest of another man they refer to as “the paymaster”.

However, while McGuinness (54) was being investigated over the campaign of violence against the QIH executives at the time of his death during a police raid in Derbyshire, England, his was a lengthy and storied criminal career.

One Garda source familiar with his modus operandi said McGuinness was “a dirty criminal” who had expertly used the Border, and the policing challenges it posed, to his advantage for decades.

Because of the pressure his gang had put on the Garda and PSNI over the QIH campaign of violence, a number of security sources said McGuinness’s death had resulted in a sense of relief in the Garda.

“You could nearly feel the building exhale when word came through,” said one Garda source of the atmosphere in Garda Headquarters, though he stressed there was no sense of celebration at the death.

While based of late in Derrylin, Co Fermanagh, McGuinness was originally from Cloghran, Swords, Co Dublin. He worked in the scrap metal business while a teenager and by the time he was 20 he was well known to the Garda.

While often referred to as a republican and even as a maverick paramilitary, gardaí believe he had no political beliefs and was a criminal motivated solely by money throughout his adult life.

He did, however, supply vehicles to the Provisional IRA and was also heavily involved with paramilitaries in smuggling alcohol, cigarettes and laundered fuel.

In 1986 he was banned from driving for 25 years and jailed for six months after refusing to stop for gardaí as they chased his lorry for a prolonged period through north Co Dublin two years earlier.

When he was convicted aged 22, McGuinness was led from Balbriggan Courthouse handcuffed to a garda and when he passed a garda sergeant who gave evidence against him he shouted “bastard” at him and then “violently spat” in his face.

District Court judge Tom Ballagh described McGuinness as a “particularly unpleasant character”. Another judge who dealt with him at the time in cases involving road traffic offences ordered he be remanded in custody for a week to allow a psychiatric evaluation.

McGuinness was also convicted of perjury in 1986 after it emerged he asked another man to give false evidence in court to the effect McGuinness was a passenger in a lorry, not the driver, during another chase with gardaí. He was given a 12-month suspended sentence for that offence and at that time gardaí believed McGuinness was heavily involved in handling stolen vehicles and smuggling them to the North and Britain for resale. He also became involved in buying and selling fake currency.

In 1992, he was caught in Dublin Airport with a small quantity of forged British £20 notes.

He was arrested but he used so many aliases, 12 in total at that time, that it took the arresting gardaí three days to establish his true identity.

Though he was only found with four £20 forged notes, because he had created and travelled under so many identities and was so unco-operative with gardaí he was remanded in custody for a month before a substantive court hearing on the charges, to which he entered a guilty plea.

He had at least three addresses at the time in north Co Dublin and also one in Middlesex, England.

While still in his 20s he also secured contracts for the collection of waste, including hazardous material, in a number of local authority areas across the country; managing to gain those licences despite a notorious reputation and criminal record. He would use these licences to run lucrative illegal fly tipping rackets as his pernicious life of crime grew more serious and he relocated, amid extreme pressure from the Garda, to Co Monaghan and later Co Fermanagh, his home for two decades.

McGuinness, who was known by his nickname “Dublin Jimmy”, had more than 50 convictions, including one for leading a gang smuggling plant machinery into Ireland. He was described in a European extradition warrant issued for him in 2008 as an active member of an Irish criminal organisation.

In an earlier, unrelated case concerning the illegal smuggling of waste, McGuinness was described by a Northern Irish police constable in a Co Tyrone court as being involved in a “major crime gang, identified as one of the top 10 gangs in Northern Ireland who have made vast amounts of money”.

In 2011, he was extradited to Belgium for stealing construction and farm machinery. His gang stole 20 trucks and cranes in Belgium and the Netherlands in 2006 and 2007 and brought them back to Ireland, where he used some of the machinery to steal ATMs from the exterior walls of banks and shops.

During the height of a spate of ATM robberies about 10 years ago, McGuinness and his underling gang members were suspects for between 10 and 15 such raids a year; operating from Kerry up to the Border region and into the North.

In April 2008, McGuinness was stopped by Serbian police near the border with Croatia and it was discovered that he was the subject of a Europe-wide arrest warrant. He was taken to Belgrade and extradited to Bruges. He faced charges in Belgium but fled after being granted bail. The Belgian court convicted McGuinness in his absence and he was sentenced to a seven-year prison term.

In 2007, McGuinness, who ran a business called Fermanagh Waste Recycling, received a suspended sentence after he admitted 22 charges relating to illegal waste transport.

He was also one of the three individuals who faced 81 charges including money laundering, handling stolen goods and illegal dumping when he appeared before Strabane Magistrates’ Court in Co Tyrone in 2005.

Figures presented in court showed that McGuinness benefited to the tune of £2.5 million (€2.9 million) from smuggling but only a fraction of this amount, less than £300,000, was recovered through a confiscation order under the Proceeds of Crime Act. He had £189,000 confiscated, made up of his half-share of equity in his house and a small amount of cash in the bank.

McGuinness lived north of the Border, on Teemore Road in Derrylin, Co Fermanagh, a short distance from the head office of Quinn Industrial Holdings.

He was said to be spending time recently in a farm house owned by one of his associates on the Cavan-Leitrim border between Killeshandra, Newtown Gore and Carrigallen.

Asked whether he knew McGuinness, businessman Seán Quinn said in an interview last month that he was “never in contact with him” but did admit to chatting to him on occasion briefly when he saw him in a local pub near Mr Quinn’s home in Ballyconnell that they both frequented.

“If he was in the pub, I would be in the pub, maybe, in Ballyconnell maybe twice a year and it could be as far as that,” Mr Quinn told Channel 4 News, gesturing a wave.

Mr Quinn had condemned the campaign of intimidation against QIH, the business he lost in the financial crash, and the violence against Kevin Lunney and his other former executives who now run the company that straddles the Cavan-Fermanagh border.