Disclosures Tribunal: What is it all about and how did it start? 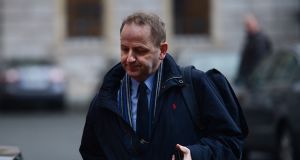 Sgt Maurice Mc Cabe made complaints about the standard of policing in the Cavan/Monaghan area. File photograph: Cyril Byrne

The Disclosures Tribunal, which was created by the Oireachtas in February of last year, investigated claims about a number of garda whistleblowers, of which Sgt Maurice McCabe is the most prominent.

A report by Mr Justice Peter Charleton about claims linked to Sgt McCabe has now been published and a new chairman, Mr Justice Sean Ryan, is now investigating matters linked to other whistleblowers.

Among the matters investigated by Mr Justice Charleton was whether the former commissioners Martin Callinan and Nóirín O’Sullivan, directed the former head of the Garda Press Office, Supt Dave Taylor, to smear Sgt McCabe.

He also investigated suggestions that the child and family agency, Tusla, might have had improper dealings with An Garda Síochána, in relation to whistleblowers.

The McCabe affair has been an extraordinarily Hydra-headed and long-running controversy that has contributed to the early end of the careers of a spectacular number of senior figures, including the two former commissioners.

The former tánaiste Frances Fitzgerald, former minister for justice Alan Shatter, two former secretaries general of the Department of Justice, Brian Purcell and Noel Waters, and the former Garda confidential recipient, Oliver Connolly, all got caught up in the McCabe controversy in ways that contributed to their departing from their positions.

It was also a contributory factor in bringing former taoiseach, Enda Kenny’s career to an earlier end than might otherwise have been the case.

At the heart of the long-running controversy was the claim that McCabe, because of his whistleblowing, was treated unfairly by senior Garda management and others.

As he and his wife Lorraine stated, in public statement last year: “We have endured eight years of great suffering, private nightmare, public defamation and State vilification, arising solely from the determination of Maurice to ensure that An Garda Síochána adheres to decent and appropriate standards of policing in its dealings with the Irish people.”

McCabe was based in Bailieborough, Co Cavan, in 2006 when he was the subject of an historical child sex assault claim by the daughter of a Garda colleague.

Some months earlier McCabe had made a workplace complaint which led to the colleague being sanctioned.

Following a Garda inquiry, the office of the Director of Public Prosecutions decided that no charges should be brought against McCabe arising from the sex assault claim.

It also decided that, even if the disputed account of events was true, they would not have constituted a sexual assault, or indeed an assault.

However McCabe was unhappy that a copy of the DPP’s letter was not shown to the complainant’s family, members of which had confronted him in the wake of the DPP decision.

In 2008 McCabe made complaints about the standard of policing in the Cavan/Monaghan area, and these complaints were investigated internally, leading to a Garda report called the Byrne/McGing report.

McCabe then made complaints about the Garda operation of the penalty points system, complaints that were taken up by the Department of Justice and which led to the introduction of reforms.

McCabe also made complaints about a number of senior officers, often in relation to matters linked to the conduct of the earlier inquiries.

In 2015 the O’Higgins commission was established to investigate some of the original complaints made by McCabe in relation to policing standards in the Cavan/Monaghan division, but also the complaints he had made against some senior officers, including Callinan.

The commission sat in private. Its report was published in May 2016, upheld many of McCabe’s complaints about poor policing standards, but said his complaints against the senior officers were unfounded. There wasn’t a “scintilla” of evidence to support the complaint against Callinan, the report said.

In the wake of the report being published, accusations appeared in the media and were taken up in the Dáil, to the effect that while in public O’Sullivan was supportive of McCabe, and whistleblowers, at the confidential sessions of the O’Higgins commission, her legal team had adopted a different attitude.

While the McCabe controversy continued, the sergeant had been contacted, in late 2015, by Tusla, to say he was the subject of a historical child sex assault allegation.

It later transpires that a new, false and hugely more seriously allegation against McCabe had been recorded by Tusla, and shared with the Garda, as a result of the original 2006 complainant having sought counselling in 2013. (She did not make the claim that was recorded by Tusla and sent to An Garda Síochána.)

The claim was put to McCabe in 2015. A year later he was told by Tusla that the entirely false claim was the result of a clerical error.

Meanwhile, in September 2016, Taylor, who had been moved from the Garda Press Office after O’Sullivan took over as commissioner from Callinan, made a protected disclosure in which he claimed that he had been ordered to conduct a smear campaign against McCabe while head of the press office.

A similar disclosure was made by McCabe, with his being based on what he was told by Taylor. The shocking claims made in the disclosures were revealed in the Irish Examiner by journalist Mick Clifford, who had been in contact with Taylor and McCabe. They were also taken up by deputies Mick Wallace and Clare Daly, who had also been in contact with the two Garda.

By early 2017, the Government was working on establishing a new commission of inquiry to investigate the smear claims, and other matters. However the fact of the more recent, false and mistaken sex abuse claim that had been mistakenly recorded on the Tusla files, was then disclosed on RTÉ’s Prime Time, creating fresh controversy.

McCabe and his wife, Lorraine, issued a public statement saying their lives and those of their five children had been “systematically attacked” in a number of ways by State agencies.

They called for a full, public tribunal of inquiry, rather than another commission which would sit in private.

They were definitely not agreeable to another commission which would conduct “a secret investigation behind closed doors”.

Rather, they said, any further inquiry had to be a public inquiry.

That public inquiry has now been conducted and the report by Mr Justice Charleton is available on the tribunal’s website.

Shooting of farmer by British army in 1974 ‘unjustified’, coroner rules