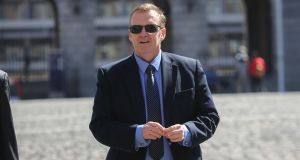 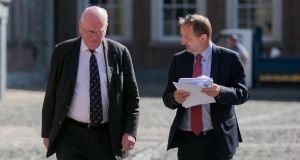 Crime journalist Michael O’Toole has said he was not negatively briefed about Garda whistleblower Sgt Maurice McCabe and was “vexed” at the idea that crime reporters were used in an alleged smear campaign.

He was speaking at the Charleton tribunal, which is examining allegations by former Garda press officer Supt David Taylor that he was directed to smear Sgt McCabe by senior figures in the force.

Former commissioners Martin Callinan and Nóirín O’Sullivan deny there was any smear campaign.

Mr O’Toole, assistant editor and crime correspondent at the Irish Daily Star, said his relationship with Supt Taylor was “proper and professional”.

He said he was approached by “a very experienced journalist with significant access to the political world” around 2011 or 2012, who asked him about rumours about Sgt McCabe.

Mr O’Toole checked the rumour with a trusted contact and established the Director of Public Prosecutions had determined there was no evidence that a crime was disclosed.

“Once I heard that, the matter was dead for me,” Mr O’Toole said.

He said the contact, who was not based in Garda headquarters or the press office, spoke highly of Sgt McCabe, calling him “Maurice”.

“I was always of the view that the Garda press office is his master’s voice. They don’t work for journalists, they work for the commissioner,” Mr O’Toole said.

He said that if a senior garda officer smeared Sgt McCabe, this would stand out in his memory as a newsworthy event. He said it was preposterous that someone would brief him at a crime scene, as the scenes were “chaotic”, and he would be busy working on the story before deadlines.

Mr O’Toole said that journalists were not popular, crime journalists even less so, and he was “vexed by the suggestion crime reporters including myself were used in this smear”.

“That story did rankle with me, and it has rankled ever since,” Mr O’Toole said.

Earlier, Michael McDowell SC, for Sgt McCabe, told the tribunal there were inaccuracies in an RTÉ report in February 2014, which stated Sgt McCabe had not cooperated with the internal garda inquiry into penalty points headed by assistant commissioner John O’Mahony.

Mr McDowell said it was not true, as the report stated, that Mr Callinan had directed Sgt McCabe to cooperate with the investigation. Sgt McCabe had instead received a direction not to access Pulse records relating to penalty points.

“It does appear that somebody was spinning a deeply unfavourable story about Sgt McCabe to RTÉ on that day,” Mr McDowell said.

Mr McDowell said it appeared someone in An Garda Síochána “with some knowledge of the background facts decided to paint a very poor picture of Sgt McCabe in order that RTÉ would misrepresent the story to the public”.

“That does seem to be the case potentially, yes,” Mr O’Mahony replied.

Mr O’Mahony said it was not his view, or that of Mr Callinan, that there was non-cooperation with the investigation by Sgt McCabe.

Mr O’Mahony said that because of the safeguards surrounding confidential disclosures and whistleblowers, he felt precluded from contacting Sgt McCabe.

Mr McDowell said that Sgt McCabe did not identify public persons for the purpose of having their names made public during the penalty points controversy.

“Whether it happened inadvertently or not, people were identified in public,” Mr O’Mahony said.

Mr O’Mahoney said he knew Paul Williams since the 1990s and they met regularly, but they had a rule that they never discussed stories the journalist was working on.

Kieran Kelly, solicitor for Independent News & Media, said Mr Williams had been critical of Garda headquarters on several occasions in articles he wrote.

Mr O’Mahony agreed this was so.