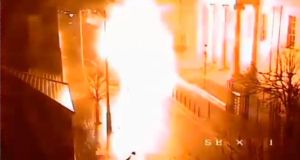 A CCTV image of the car bomb exploding outside the courthouse on Bishop Street in Derry.

It’s an image that people in Derry have become unused to seeing. CCTV footage shows the moment the car explodes outside the city’s courthouse. In an instant, it becomes a fireball, tongues of flame shooting high into the sky, burning debris floating down around it.

At the police cordon, the phrase – “car bomb” – is repeated over and over again. This is the Diamond, the very centre of Derry, and police officers and journalists mingle with members of the public dressed up for a night out in one of the nearby hotels, restaurants, bars and clubs.

“You hear those words, ‘car bomb’,” says one veteran journalist, “and it just takes you back. It’s a long time since I’ve stood at a cordon like this on a Saturday night. We thought those days were gone.”

“What on Earth is this for?” asked one woman who had been on her way to dinner with her husband. They heard the explosion, and went to see what had happened. “Nobody wants this.”

That sentiment was echoed by the mayor of Derry, John Boyle. “Words fail me,” he said. Palpably angry, he emphasised that most people in the city were trying to build a better future, yet he found himself once more condemning a bombing.

“The people of this city want to move forward, they want to build a better future for young people in particular, and I am deeply saddened that a minority in our community wants to drag us back to the past and, what’s worse, threaten life.”

Hundreds of people were in the area when the bomb was abandoned outside the courthouse on Bishop Street. CCTV footage showed the car – which had been hijacked from a pizza delivery driver earlier that evening – being driven towards the courthouse and parked outside. A black-clad man was then seen running away.

Twenty minutes later, a group of young people walk past the car, laughing and talking.

The police only just managed to clear the area in time. Some 150 young people were in a youth club directly opposite, ready to start a charity quiz night. They were brought to safety by PSNI officers, who cut gates to allow them to escape on to the city’s walls.

In the hotel beside the courthouse, staff were told to close the doors and move people to the back of the building. “I was sitting eating my dinner when the bomb went off,” said one woman.

Nobody was hurt, and there appeared to be little physical damage to buildings. PSNI Assistant Chief Constable Mark Hamilton had no doubt that the bomb was a “significant attempt” to endanger life. Had anybody been nearby when it exploded they would have been killed, he said.

The police’s main line of inquiry is that the dissident republican group the New IRA were responsible. An extensive police investigation is under way, and four men were arrested on Sunday.

Most of Bishop Street had been cordoned off since the explosion, and part of it was likely to remain so for much of Monday.

Among the businesses affected was the Holywell Trust, a community development and community relations organisation. A suicide prevention service, which runs in the trust’s building at weekends, was unable to access the premises.

“Everyone who works in this building is at work serving the community and those most in need,” said director Gerard Deane, “and now they are being deprived from doing so by people who have no moral authority.

“We are about building relationships, and about moving on, and we know from the groups we work with that nobody wants to go back to the past.”