Whistleblower row: Malicious sources have no right to protection

Colum Kenny: Should sources be protected when destroying a person’s character? 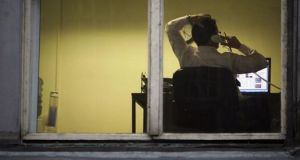 It can be brave and ethical for journalists to protect sources where the latter risk their lives or livelihoods in the public interest. “Protecting sources” to keep open a flow of biased information is not the same thing. File photograph: Getty Images

However the smear against Sgt Maurice McCabe had started, by early 2014 some crime correspondents claimed to be hearing from gardaí that Sgt McCabe was under suspicion for alleged sex abuse.

It shocked me because I know many good gardaí, and by then I knew Sgt McCabe.There was, as is clear now, no substance to the allegations.

The fact that some crime correspondents said the allegation was being circulated by gardaí ought to have set alarm bells ringing in newsrooms whenever it came to Garda sources.

The reaction of one newsroom to another leak - that of part of the report of the O’Higgins Commission of Inquiry in 2016 - is now about to be investigated by Supreme Court Judge Peter Charleton. It raises the question of when, if ever, journalists should protect sources that use them maliciously.

According to the Government this week, in that RTÉ report of May 9th, 2016, Sgt McCabe “was branded a liar and irresponsible”. The current Garda Commissioner, Nóirín O’Sullivan, denies categorically that she was its source.

It was not the first time that RTÉ’s coverage of whistleblowers raised questions about the station’s use of sources.

In March 2014, RTÉ NEWS claimed it had “seen” the then unpublished Garda Inspectorate Report on penalty points.

It presented a version of that damning report in advance of publication that seemed milder and less favourable to whistleblowers than some post-publication interpretations by others in RTÉ and elsewhere.

The bulletin did not include a statement from, or interview with, any whistleblower. Sgt McCabe and other whistleblowers were deeply unhappy with RTÉ’s coverage.

Fianna Fáil’s justice spokesman Niall Collins was interviewed on that 2014 bulletin, but without having seen the report, or even seeing whatever part RTÉ may have seen. He complained later that selected sections of the report had been leaked ahead of its presentation to Cabinet.

Then minister for justice Alan Shatter gave RTÉ News an exclusive interview for that same bulletin, during which broadcast he was not challenged.

Not for him the tone of this week’s grilling of Brendan Howlin on Morning Ireland, following Howlin’s naming of the Garda Commissioner in the Dáil.

The Garda Inspectorate told me in March 2014 that two months earlier it had sent out (in strict confidence) just four copies of that draft report on the penalty points system - two to the then secretary-general of the Department of Justice, and two to the assistant secretary.

In February it sent in confidence two copies of its final report on the same matter to the then minister for justice, and one copy each to the secretary-general and assistant secretary. Copies were sent also “only” to the Garda Commissioner.

RTÉ News did not tell viewers in the 2014 bulletin that the report indicated that several senior gardaí had in effect given credit to the whistleblowers for going public. Several senior Garda officers had lamented: “... if everyone had just followed the manual ... we wouldn’t be dealing with this ...”

The Inspectorate was told also by several senior gardaí that but for the public scrutiny resulting from the action of whistleblowers, “the extent of the deficiencies within the fixed charge processing system would not have been detected”.

RTÉ, which said it had seen the Inspectorate’s report, did not mention these facts then. Was this merely an editorial judgment by RTÉ, which it is entitled to make, or was RTÉ the victim of manipulation through the selective release of a confidential public resource?

Delighted with its scoop, RTÉ led with it on its main news bulletin on March 11th, 2014, with Eileen Dunne telling viewers RTÉ had “seen” the report.

Asked by me then to clarify whether RTÉ had had an opportunity to read the entire Garda Inspectorate report prior to its news broadcast, RTÉ refused to say.

Viewers could easily have concluded the station had in fact seen and read the entire Garda Inspectorate report before exercising its respected editorial judgment in presenting an apparent synopsis of it.

So, should RTÉ now produce evidence to prove that it ever saw ALL of the O’Higgins 2016 report and of the Garda Inspectorate 2014 report, or reveal what sections of those reports were furnished to it?

And should crime correspondents generally now co-operate with the Charleton inquiry by confirming whether some Garda sources were repeating to them sexual allegations against a whistleblower?

Claiming that a refusal to do so somehow protects sources is untenable. No particular source could possibly be identified by confirming such apparent facts in general terms.

Should correspondents go further and identify any senior garda who repeated to them vicious sex abuse smears? Should such “sources” be protected when maliciously engaged in destroying a person’s character? Sources in such cases have no absolute right to anonymity.

It can be brave and ethical for journalists to protect sources where the latter risk their lives or livelihoods in the public interest. “Protecting sources” to keep open a flow of selected and biased information is not the same thing.

Four years ago, I was asked by a garda to investigate the predicament of Sgt Maurice McCabe, whose revelations about the broken and abused penalty points system had isolated him, and whom most of the media seemed to doubt.

McCabe was then cautious and understated, being worried for his family. After blowing the whistle, he was subjected to disciplinary proceedings in relation to the loss of a computer in a serious sex abuse case in Cavan, years after that loss, and where he was not even a member of the investigating team.

After much stress, he was entirely vindicated by the Garda’s own internal inquiry.

But he still faced smears now being investigated. The loss of that computer, which possibly contained details of other abused children and of unconvicted abusers, as well as the circumstances of its investigation, deserves its own independent inquiry.