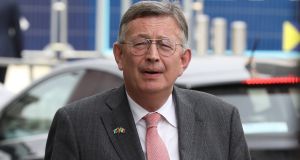 A jury will return to the High Court on Friday to resume considering its verdict on proceedings by solicitor Gerald Kean alleging he was defamed in a newspaper article concerning a visit by members of the Criminal Assets Bureau (CAB) to his Dublin office.

Mr Kean has sued over an article published in the Irish Daily Star on May 11th 2016, headlined ‘Kean Caught Up in CAB probe.’

It concerned a visit by CAB officers on May 9th 2016 to the solicitor’s offices at Upper Pembroke Street with a view to getting a conveyancing file relating to the purchase in 2015 of a house at Kildare Road, Crumlin by a client of the firm, Dubliner Seán McGovern, whom CAB suspected of involvement with the Kinahan crime gang.

CAB had secured warrants from the District Court to search 18 premises, including Mr Kean’s, on March 9th 2016 as part of its long-running investigation into the assets of the Kinahan gang.

The file was provided to the CAB officers by Mr Kean’s office and a senior CAB officer told the court it ultimately lead to Mr McGovern’s house being forfeit to the State as the proceeds of crime.

Mr Kean claims the article wrongly meant he was linked to gangland crime and damaged him personally and professionally.

Independent Star Ltd denied defamation and also pleaded fair and reasonable publication for purpose of discussion of a matter of public interest in the public benefit.

The jury of five women and seven men were instructed on the applicable law by Mr Justice Bernard Barton on Thursday before going out about 3.40pm to begin deliberations .

After the chairman also said some of the jurors were tired and would like to go home and have a fresh start in the morning, the judge said the jury could go home and return at 10am on Friday. He said he would address the query concerning guidance as to a majority verdict at that stage.

In considering their verdict, the jury has an issue paper setting out three questions.

The first asks whether the article meant Mr Kean was subject of a probe by CAB into the criminal activities of the Hutch/Kinahan gang following the Regency Hotel shootings and was suspected by CAB of being associated with gangland crime and of facilitating criminal activity in his profession as a solicitor.

If they find the article did not bear any of those meanings, that is the end of the case.

If they find it meant any or all of the meanings alleged, they go on consider question two.

Question three concerns assessment of damages and is dependent on how the jury answer the first two questions.