Colm Horkan ‘was an absolute rock of integrity and sense’

Castlerea and Charlestown united in grief after killing of detective garda 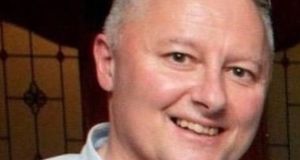 Never again will they start a summer with the hope-filled Mayo championship campaign stretched out before them, or ever have that first post-lockdown pint together. All that is gone now, having been taken away in a few seconds of mindless violence.

Yesterday morning the Republic woke up to news that Det Garda Horkan had been gunned down in the line of duty late on Wednesday in the Co Roscommon town of Castlerea, where he was based as a detective garda.

The tragedy is especially bewildering coming as it does after the coronavirus lockdown, when the relationship between gardaí and other citizens seemed closer than ever.

While the Horkan family home in Charlestown, Co Mayo, was a hive of activity yesterday as people came throughout the day to pay their respects and share their grief, Castlerea came to a complete standstill.

The whole town was sealed off and all of the businesses closed as the Garda Technical Bureau examined the crime scene and discovered bullets and shell casings over a wide area; evidence of a shooting spree that is without explanation.

For now, some things about Det Garda Horkan’s murder are certain while other details must be investigated by his colleagues in An Garda Síochána.

In his 25th year of Garda service, Det Garda Horkan was on an anti-crime patrol on Wednesday night, working alone.

He stopped a local man on a motorbike on Main Street just before midnight, apparently to quiz him about his movements.

But what began as a routine stop – “a conversation” as Garda Commissioner Drew Harris put it – escalated into a scuffle between the two men and Det Garda Horkan pressed a button on his radio looking for emergency back-up.

Before help could arrive, the suspect somehow grabbed hold of the detective’s firearm and began shooting. Some 15 shots rang out, a number hitting Det Garda Horkan and taking his life.

While two Garda colleagues arrived and arrested the suspect as paramedics worked on the injured man, it was too late. Det Garda Horkan died at the scene.

Fr John McManus was summoned from his home on St Patrick’s Street just yards away and gave Det Garda Horkan the last rites on the road. By now his colleagues had rushed to the scene; gathering around their friend’s body and praying over it, led by Fr McManus, scarcely able to comprehend the scene before them.

“Everyone was very stunned, shocked and saddened,” said Fr McManus of the scene in the early hours.

Phone calls were then placed to relay the terrible news to the Horkan family in Charlestown; Det Garda Horkan was dead, losing his life a decade and a half after his twin sister Collette had succumbed to cancer.

Gardaí are not looking for anyone else in relation to the murder; the shooting dead of the 89th Garda member killed on duty since the foundation of the force almost a century ago. The murder investigation is centred solely on the suspect arrested at the scene.

People in Castlerea said that man, in his 40s and known to gardaí, had mental health issues compounded by substance abuse.

The same community described Colm Horkan as “a gentleman” and “beloved”; a man who won many accolades with Charlestown Sarsfields, including a Connacht Senior Club Football Championship in 2001, and had lined out for the Mayo U21s.

After leaving Charlestown for the Garda Training College, Templemore, Co Tipperary, in his mid-20s in 1995, the first 3½ years of his career were spent in Finglas, north Dublin. After that he transferred to the west of Ireland, arriving in Castlerea in January 1999.

He served there for more than a decade, followed by a stint in his native Charlestown and then Ballaghaderreen, before returning to Castlerea recently for a second term on promotion to detective.

He is survived by his father Marty, sister Deirdre and four brothers – Aidan, Brendan, Pádraig and Dermot.

John Hynes, a retired Garda sergeant who was close to Det Garda Horkan in both their personal and professional lives, spoke about him on Thursday. He said his murdered colleague and friend stood out in the Garda force as “a gentleman” committed to serving the public.

“From the get-go, Colm was the most reliable guy you could get, he was an absolute rock of integrity and sense. He was really and truly the true professional in the job, with attention to detail in every aspect of the job that was absolutely exemplary.

“I say this from the bottom of my heart, he really and truly was my right-hand man when I was there at work and he was one of the best friends I ever had both in An Garda Síochána and since I retired out of the job. He was the epitome of what it meant to be a guard in modern society.”