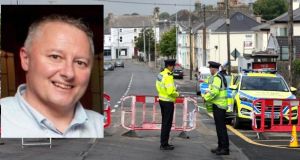 The scene of the shooting in Castlerea was sealed off on Thursday. Photograph: Collins. Insert photograph: Detective Garda Colm Horkan who was killed in the shooting.

The man who shot a detective garda in Castlerea, Co Roscommon, on Wednesday night fired 15 times with four shots hitting Det Gda Colm Horkan who was on duty at the time.

The 49 year old detective garda died from gunshot wounds shortly before midnight following a struggle with the man in the centre of the town.

The shooting took place near Castlerea Garda station after the detective stopped the man to speak to him on Main Street, apparently after seeing a motorcycle being driven erratically.

It is understood a struggle then ensued during which the detective’s firearm came loose from its holster.

The other man then fired the gun multiple times - up to 15 rounds, which is the capacity of the gun - with a number of shots hitting Det Gda Horkan. The gun was empty of bullets when recovered.

Gardaí spent much of Thursday recovering spent rounds from the surrounding area.

Garda Commissioner Drew Harris who visited the scene on Thursday said he was deeply saddened by the death.

He said there was no evidence that the killing was linked to organised crime or subversives.

Speaking in Castlerea he said while all aspects of the Garda’s resources, tactics and policing methodology would be reviewed in light of the fatal shooting, there appeared to be unique characteristics to the crime that may not necessitate major changes in the Republic’s policing.

“This act is unusual, it’s an aberration and viewed as such. And so we’d have to think very carefully before we would change our policing tactics. Our policing tactics are successful in that we enjoy the full support of this society.

“What we have here is a random act, obviously a violent act, which has led to the death of Det Garda Horkan. It is tragic and it is an attack upon us all.”

Two gardaí from Castlerea station, who were passing the scene of the shooting in a patrol car, saw the immediate aftermath of the killing. They tackled the suspect and arrested him.

Speaking at Government buildings on Thursday afternoon the Taoiseach Leo Varadkar expressed his condolences to the family of Det Garda Horkan and said his death was in the “most tragic of circumstances and today a nation is grieving”.

Mr Varadkar said he had spoken to the Garda Commissioner and the Minister for Justice Charlie Flanagan about the incident and had been in touch with Det Garda Horkan’s family.

“I extend my condolences to all of his colleagues in Castlerea Garda Station, to every member of An Garda Síochána, to his friends and all who knew him”.

He said Det Gda Horkan “gave his life protecting the community he served with distinction and courage during his 24 years as a member of An Garda Síochána.

“His story is the same as thousands of men and women who wear the uniform. It is a story of courage, sacrifice and service.

“Our gardaí are the guardians of the peace and defenders of the rule of law. They are role models in our society.

“This tragedy is a heartrending reminder of how much we owe our gardaí for the work they have done all over the country.”

The suspect, a man in his 40s, was being questioned at Castlerea Garda station on Thursday. The Garda Síochána Ombudsman Commission has been informed as it must be notified of any such incidents involving loss of life or serious injury within the Garda and where a garda’s official firearm was involved.

Gardaí have appealed for witnesses to come forward, particularly those who were in Castlerea town centre between 11.30pm and 12.30am or those with dashcam footage. An incident room has been set up in Castlerea Garda station on 094 962 1635.

The garda’s body was taken from the scene to Castlebar General Hospital where a postmortem is due to be done later by the State pathologist.

“The scene at the junction of Patrick Street and Main Street Castlerea remains sealed off pending a forensic examination by the Garda Technical Bureau,” a Garda statement said.

“A man, aged in his 40s, was arrested at the scene and remains detained at Castlerea Garda Station under Section 30 of the Offences Against the State Act 1939.”

Det Garda Horkan lived with his father in his native Charlestown, Co Mayo where he was heavily involved in the local GAA club. He is pre-deceased by his mother and twin sister and is survived by another sister and four brothers.

Many tributes have been paid to Det Gda Horkan and a large number of people attended prayers in his memory in Castlerea on Thursday night.

President Michael D Higgins said the death of Det Gda Horkan had “come as a shock to us all”.

“As President of Ireland I wish to express my deepest sympathy to the family and friends of the garda, and to all those who have been affected by this tragedy,” Mr Higgins said.

Mr Flanagan, who travelled to Castlerea, also offered his sympathy to man’s family. He said these were difficult days for An Garda Síochána and there was a palpable feeling of grief and shock in the town.

Det Gda Horkan was the 89th Garda member to die on duty since the foundation of the State.

It is almost five years since the last Garda member was killed on the line of duty. Garda Tony Golden was shot dead in Omeath, Co Louth, in October 2015 by dissident republican Adrian Creaven Mackin.

Gda Golden, an unarmed uniformed garda, was attempting to bring the killer’s partner to safety from a domestic violence situation. Creavan Mackin then turned the gun on himself.

The shooting happened close to Henry Byrne Road, named after one of two officers shot dead in 1980 after a bank robbery. Det Gda John Morley and Gda Henry Byrne died on July 7th that year after intercepting armed bank raiders at Shannon’s Cross, just outside the village of Loughglynn in the west of the county. They were also based in Castlerea station.

Retired Roscommon garda sergeant John Hynes spoke of his devastation at the death of his close friend and former colleague Det Garda Horkan.

“He was part of our family. Our own children are heartbroken,” he told RTÉ Liveline programme.

“From the get go Colm was the most reliable guard you could get,” he said.

Detective Horkan had moved to Castlerea in 1999 having spent his first four years in the force in Finglas. “He was delighted to get closer to home. He was a rock of sense, a true professional with great attention to detail in every aspect of the job. You could always rely on him. One of nature’s gentlemen. Really and truly he was my right hand man, my best friend,” he added.

“Colm worked on the [Roscommon] House of Horrors case with me. I relied on him heavily ... He had been one of the main cogs that brought the case forward, that could not have happened without his attention to detail in preparing the cases.

“Colm was an all rounder in sports, he was a great footballer and a keen golfer. He excelled no matter what he turned his hand to. I never heard anyone say anything other than a good word about Colm Horkan.

“He was the epitome of what it means to be a guard in contemporary society. He had a sense of calm about him when confronting a dangerous situation. He would talk a person down. He had that quality.”

The Lord Mayor of Dublin, Tom Brabazon has opened a book of condolence for the people of Dublin to extend their sympathies to the family of Det Garda Horkan.

1 Coronavirus: Unwinding of latest stage of roadmap ‘could be pushed back further’
2 UK accuses Russia of election interference and trying to steal Covid-19 vaccine
3 Coronavirus in Ireland: Further reopening delayed amid 'worrying' rise in infection rates
4 The downing of a minister: How Barry Cowen went from hero to zero in just twelve days
5 Muslim group seeks permission for Croke Park Eid event to go ahead
Real news has value SUBSCRIBE