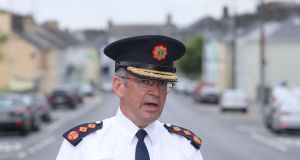 The shooting dead of Det Garda Colm Horkan was done randomly and for “no purpose” and was an “aberration” in Irish policing, Garda Commissioner Drew Harris has said.

He added there was “no sign of a bigger picture, either organised crime or subversives” relating to the shooting dead of the 49-year-old detective in Castlerea, Co Roscommon, late on Wednesday night as he was on an anti-crime patrol alone in the town.

While Mr Harris said all aspects of the Garda’s resources, tactics and policing methodology would be reviewed in light of the shock killing, there appeared to be unique characteristics to the crime that may not necessitate major changes in the Republic’s policing.

“Bear in mind we do police with the consent of the community and we are a community-based policing service,” Mr Harris said when asked by the media if the killing would prompt changes to policing.

“This act is unusual, it’s an aberration and viewed as such. And so we’d have to think very carefully before we would change our policing tactics. Our policing tactics are successful in that we enjoy the full support of this society.

“What we have here is a random act, obviously a violent act, which has led to the death of Det Garda Horkan. It is tragic and it is an attack upon us all.”

Mr Harris, who was speaking to the media while visiting Castlerea on Thursday, added policing was “an extension of good citizenship” and the murder of a Garda member “demeans and belittles us all” as a society.

“Ultimately we have lost here today, for no good purpose, a really beloved member of this community; a garda out doing his duty and doing what I would ask of him and what the community would ask of him,” Mr Harris said.

He added he hoped to meet the Horkan family, who are from Charlestown, Co Mayo, as early as Thursday to convey his condolences and to reach out to them and support them.

“Obviously we will all be there for them in the weeks, months and years ahead to support them with the terrible burden they have to bear now,” he said.

Det Garda Horkan had been on duty “preventing crime and trying to keep people safe” at the time he was gunned down and his killing was “a dreadful loss for us all in society”.

The deceased Garda had been in the force for 24 years and had only very recently been promoted to detective. He was one of twins and was predeceased by his twin sister and his mother.

He had one other sister and four brothers and lived with his elderly father in Charlestown, where he was a very popular figure.

He had been based for about 3½ years in Finglas, north Dublin, during the early part of his policing career before spending periods based in Charlestown, Ballaghaderreen and Castlerea. He had previously been based in Castlerea Garda station before being transferred and moving back to the Co Roscommon market town for a second stint.

The Irish Times understands while the murdered detective was on duty alone on an anti crime patrol, at the time he was shot dead he was not responding to a call or intervening in any dispute or domestic incident.

Instead, when he saw a man known to him on Main St he engaged him in conversation, perhaps to inquire about his movements, sources said. That exchange escalated into a physical confrontation.

Det Garda Horkan used his radio to call for emergency assistance but somehow the suspect managed to take possession of the detective’s gun and fired several shots at him, which were fatal.

Garda sources said that two uniformed, unarmed, Garda members were on patrol in a Garda vehicle in the town at the time and they passed the crime scene in the immediate aftermath of the shooting and arrested the suspect.

Several local people have also told gardaí of hearing four or five shots being fired, a number of which hit Det Garda Horkan and killed him almost instantly.

Any sound on the street just after Det Garda Horkan pressed the emergency button on his radio seeking urgent back-up should have been automatically recorded meaning anything that was said or shouted immediately before the shots were fired should be available to gardaí to review.

Mr Harris did not speak about the precise detail of the gun murder but he said the investigation team believed the shooting arose from “a conversation” between the dead garda and the suspect, which escalated rapidly and saw the garda’s service pistol used against him.

“He received very prompt and professional medical attention at the scene but to no avail and he died at the scene,” Mr Harris said of Det Garda Horkan.

“I’ve spoken to the station gardaí here today (in Castlerea) and right across An Garda Síochána, all of us are extremely saddened and shocked to hear what had developed during the night,” he said.

Many Garda members and people from the local community had railed around the gardaí based in Castlerea who had lost a colleague and the “full resources” of the Garda were being applied to the murder investigation despite the “deep sadness” felt across the force.

Mr Harris said anyone who saw anything suspicious in the town on Wednesday night should come and speak to gardaí and urged people who may have been recording the area on any device, including CCTV or dashcam, to contact the investigation team.

He added images of the scene immediately after the shooting had been shared online soon after the shooting dead of Det Garda Horkan and he appealed to the person who captured those images to come forward, saying their evidence could be crucial.