At least 30 gardaí have been shot or violently killed, most recently Tony Golden in Omeath in 2015 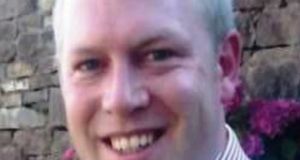 The fatal shooting of detective garda Colm Horkan on Thursday brings to 89 the number of gardaí who have died while on active service for the force.

Most of those killed were involved in road traffic incidents or died while trying to rescue others.

However, at least 30 members of the force were either shot or violently killed. Some of these officers include:

Garda Golden was aged 36 when he was killed after responding to a domestic violence complaint in Omeath, Co Louth, on October 11th, 2015.

He was shot five times and killed by Adrian Crevan Mackin who then took his own life. Crevan Mackin’s partner Siobhan Philips, who Garda Golden was seeking to protect at the time, was also shot multiple times in the incident, but survived.

Detective Garda Adrian Donohoe was killed in Bellurgan, Co Louth on January 25th, 2013. The father-of-three, who was in his 40s, was shot dead as he stepped from his vehicle during a botched raid on Lordship credit union.

The father-of-three died after he was doused in petrol and set alight. Daniel O’Toole entered the Tallaght Garda station and poured petrol over himself. Sgt Callanan attempted to disarm him. However, the man threw petrol at him and set it alight. The garda later died from his injuries.

Det Garda McCabe and a colleague, Det Garda Ben O’Sullivan, were on duty escorting a post office truck during a cash delivery at Adare, Co Limerick.

Their patrol car was rammed by a vehicle driven by members of the IRA.

Other IRA gang members then opened fire on the patrol car. Det Garda McCabe was killed and his colleague seriously wounded.

Det Garda Hand and a colleague were on duty in an unmarked patrol car which was providing an armed escort to a post office van. As they pulled up outside the local post office to make the delivery, they were ambushed by armed members of the IRA. Gardaí and the raiders exchanged gunfire and Det Garda Hand was killed.

Sgt Patrick McLoughlin was asleep in the early hours of April 11th, 1983, when he heard a knock on the door of Dunboyne Garda station. He opened the upstairs window to see who was there. He was shot and died later from his injuries.

In November 1983, businessman Don Tidey was kidnapped by the IRA in Dublin. Following a tip-off, gardaí focused their search on the Ballinamore area of Leitrim the following month. Garda Gary Sheehan (23), a new recruit, and Pte Patrick Kelly were killed in a subsequent shoot-out.

Det Garda Quaid and Det Garda Donal Lyttleton were investigating armed bank raids which took place in Callan. They stopped a van at Ballyconnick Quarry which was driven by an IRA member.

When they went to search the van - which was later found to contain explosives - the driver drew a gun. In the confrontation, Garda Quaid was shot and killed.

Both gardaí were killed by paramilitaries, believed to be members of the INLA, after they pursued raiders involved in a bank robbery near Loughglynn, Co Roscommon. Of the three gang members, two were sentenced to 40 years’ imprisonment; the third person’s conviction was overturned.

Garda Michael Clerkin, along with four colleagues, responded to a call that suspicious activity was taking place at a derelict house near Portarlington, Co Laois. As they began searching the house, a booby-trap bomb exploded. Garda Clerkin was killed, while his colleagues were seriously injured.

Three armed raiders robbed the Killester branch of the Bank of Ireland on Dublin’s Howth Road in September, 1975.

Garda Michael Reynolds, who was off duty at the time, chased the car to St Anne’s Park, Raheny. The raiders left the car and fled on foot. He caught one of the gang members.

When he refused to let him go, he was shot in the head by one of the other gang members.

A full list of all the officers killed in the line of duty is available here.