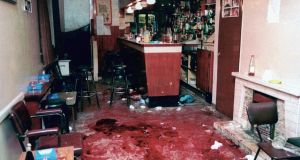 A former Police Ombudsman “overstepped the mark” in finding RUC officers committed criminal acts of collusion with loyalists who massacred six Catholic men, the Court of Appeal in Northern Ireland ruled on Thursday.

But judges rejected a bid by two retired senior policemen to quash the watchdog’s entire public statement on the Loughinisland atrocity.

They accepted it had been appropriate for the ombudsman to acknowledge what he had uncovered was in line with the views of the victims’ families on corrupt relationships between security force personnel and the paramilitary killers.

“The determinations he made in the three offending paragraphs . . . overstepped the mark by amounting to findings of criminal offences by members of the police force,” the judge said.

The verdict was delivered on the 26th anniversary of the atrocity.

UVF gunmen opened fire at the Heights Bar in Loughinisland, Co Down, as their victims watched a World Cup football match in June 1994.

The men killed were: Adrian Rogan (34), Malcolm Jenkinson (53), Barney Green (87), Daniel McCreanor (59), Patrick O’Hare (35), and Eamon Byrne (39). Five others were also wounded in a sectarian attack for which no one has been brought to justice.

In June 2016, Dr Maguire said collusion between some officers and the loyalists was a significant feature in the murders. He found no evidence police had prior knowledge, but identified “catastrophic failings” in the investigation.

Raymond White, representing the Northern Ireland Retired Police Officers’ Association, and Ronald Hawthorne, a former sub-divisional police commander, have been involved in a long-running legal challenge to the published findings. A first hearing resulted in a ruling in 2017 that the report was procedurally unfair and had failed to make clear it conclusions did not apply to Mr Hawthorne.

At that time the watchdog agreed to remove any references to him to ensure he is not connected to any alleged wrongdoing.

In November 2018, a high court judge rejected the retired officers’ case that Dr Maguire had exceeded his legal remit and refused to quash the report. Mr White and Mr Hawthorne mounted an appeal against that ruling.

Ruling on the appeal on Thursday, the judge said the dispute centred on comments in a summary chapter of the report. “We consider that the emphatic conclusions reached by the ombudsman in the three offending paragraphs go beyond mere modes of expression and exceed his powers. We do, nevertheless, uphold the decision of the judge at first instance not to strike down the public statement because of what was written therein.”

In a statement issued through their solicitors, the Loughinisland families said they were relieved the report had not been quashed.