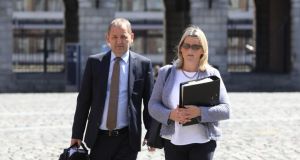 Sgt Maurice McCabe with his wife, Lorraine, at the Charleton tribunal in Dublin Castle, on Monday. Photograph: Collins Photos

The woman who made a complaint of child sexual abuse against Sgt Maurice McCabe told the Garda Síochána Ombudsman Commission she was told he watched young girls coming out of school, the Charleton tribunal has heard.

The woman, who is being called Ms D, made the statement when interviewed by two Gsoc officers in 2014. She told the tribunal that her father, who is a garda, had been told this by Det Supt John O’Reilly.

She said her father had been told the Garda whistleblower went to a secondary school and “watched the young ones” coming out.

However the woman’s father, Mr D, in his evidence to the tribunal, said he had never told his daughter that. “That’s not true. I didn’t say it,” he told Michael McDowell SC, for Sgt McCabe.

Ms D, in her evidence, was not asked about the matter.

The tribunal also heard that in her interview with Gsoc, Ms D said she had heard that a girl from Clones, Co Monaghan, had made an allegation against Sgt McCabe.

Mr D told Mr McDowell he had been told by another garda, now retired, that there was a “whisper” of such an allegation. “I didn’t put any credence on it,” he said. However he might have “mentioned it in passing” to his daughter.

Ms D, her father and her mother all gave evidence on Monday in the absence of the public as part of the tribunal’s inquiry into developments in 2013 in relation to Ms D and whether they had any links to any attempt to smear Sgt McCabe, a Garda whistleblower.

A complaint in 2006 by the then 12-year-old girl that she had been sexually assaulted in 1998 by Sgt McCabe, during what the tribunal has described as “horseplay”, was investigated at the time but no charges were brought.

In the wake of Ms D attending counselling in 2013, a false report was generated involving a much more serious alleged assault, and a version of this erroneous report was notified to the Garda.

All three members of the family gave evidence of their shock and confusion when they learned in 2014 of the false allegation.

Both Mr D and Mrs D gave evidence that they feared at first the false claim might be true, and be something their daughter had kept from them.

Ms D said she was “livid” when she heard what had happened. “I would not want my name associated with a false allegation like that,” she said.

Ms D was asked about a comment she made in 2014 to Independent Group crime reporter Paul Williams.

She said the disclosures made by Sgt McCabe had “ripped apart” the “family” that was the Garda in the Cavan-Monaghan area, with people no longer being able to trust one another. Sgt McCabe was not a nice man, she said, and had “ruined a lot of careers”.

Michael McDowell SC, for Sgt McCabe, asked who the witness was referring to when she spoke of people’s careers being ruined.

She said she did not know specifically, and it might have been “a flippant remark”. Asked if it was a reference to her father, she said Sgt McCabe had not ruined her father’s career.

Mr D said he was not friends with Sgt McCabe. However, he said, a disciplinary tribunal that was established in 2005 after a report by Sgt McCabe about him was “not Sgt McCabe’s fault, it was my fault”, he said.

The tribunal has heard that following the disciplinary inquiry, Mr D was assigned to other duties in Bailieboro station in Co Cavan.

The tribunal continues on Tuesday.