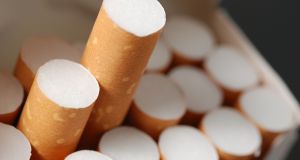 A member of the Irish Naval Service was disciplined for bringing too many duty-free cigarettes on board a naval ship. Photograph: Istock

A member of the Irish Naval Service has launched a legal action over being disciplined for bringing too many duty-free cigarettes on board a naval ship.

Eugene O’Toole has brought the High Court case arising out of an incident last September when he was serving aboard the LE James Joyce, then anchored at Valetta in Malta.

Mr O’Toole, from Mallow, Co Cork, claims a reprimand he received following a disciplinary process should be quashed because the sanction was imposed by his commanding officer who, he claims, also played a role in the investigation of the allegation.

The incident occurred when Mr O’Toole brought duty-free cigarettes on board. His case is that he had obtained permission from a superior officer.

Three charges were brought against Mr O’Toole. They were considered by Lt Cmdr Manning last April. Two were dismissed, one was found proven and Mr O’Toole received a reprimand.

Ms Justcie Margaret Heneghan granted the ex parte (one side only represented) application for leave to bring the case and returned the matter to October.