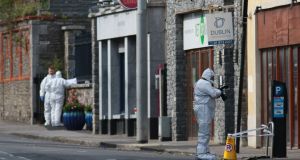 Garda technical members at the scene of the killing of Dermot Byrne, in Swords, Co Dublin, on Sunday. Photograph: Nick Bradshaw

A man (29) who was arrested in connection with the murder of father-of-three Dermot Byrne has been released without charge.

Gardaí confirmed the man was released from Swords Garda Station on Tuesday morning after he was detained for questioning for a period of 36 hours.

A file is being prepared for the Director of Public Prosecutions in relation to the questioning.

The Irish Times earlier reported that the individual who was arrested on Sunday evening has a violent history of drink- and drug-fuelled crime.

He has served several prison sentences and has about 70 previous convictions. Some of the crimes on his record were committed when on bail for other offences, including threats to kill.

On one occasion he subjected a woman to a violent ordeal just hours after being released on bail for another violent crime. He has also been involved in burglaries and theft-based crimes.

The suspect, a 29-year-old from south Dublin, was arrested on Sunday night following the murder of Mr Byrne in the early hours of that morning.

Mr Byrne, who was in his mid-50s and ran a successful bicycle-import business in Finglas, north Dublin, was found badly beaten in Swords at 3am on Sunday.

Passersby raised the alarm and gardaí, and paramedics went to the scene. Mr Byrne was pronounced dead at the scene on North Street, Swords, close to Fingal Community College. He had been kicked to death.

While gardaí suspected the attack involved several people, the man in custody last night has emerged as the chief suspect.

Mr Byrne was left for dead on the side of the road and had been stripped of his clothing by whoever killed him.

He had been out socialising in the Swords area on Saturday night into the early hours of Sunday morning. Gardaí believe he was murdered in a spur of the moment attack. Mr Byrne was not known to gardaí.

The man being questioned has been traced to Swords on Saturday night into Sunday morning, though he has lived at a range of addresses in west and south Dublin in recent years.

The suspect being questioned was due to be charged or released from Garda custody early on Tuesday morning.

Mr Byrne has been described as “one of the nicest and most genuine people you could wish to meet”.

Originally from Finglas, he was living with his family at Feltrim Road near Swords. He was an accomplished pool player who regularly travelled to take part in tournaments both domestically and internationally.

The Irish Blackball Association, which co-ordinates the sport in Ireland, paid tribute to Mr Byrne and said the pool world had “lost one of its own”.

“The Irish Blackball Association on behalf of every player who has ever met Dermot wish to convey their deepest sympathies to his family on this most tragic loss. Dermot will be missed by everyone he met,” it read.

“He was one of the nicest and most genuine people anyone could wish to meet. A true gentleman who never had a cross word with any soul.

“We are so proud to have had the opportunity of knowing Dermot, and the honour of being in his company. We will miss you, friend.”

Mr Byrne was the father of three daughters, and was a director of the family-run Intercontinental Distributors bicycle business in Finglas.

Reacting to the news of his murder, local Fianna Fáil councillor Darragh Butler pointed at Garda cuts in the area and said people will be angry that such scenes of violence were played out on their doorstep.

“We have suffered cuts in Garda resources. The gardaí are doing Trojan work and working overtime to try and keep up with everything that’s going on, but at the same time they can’t be everywhere.”