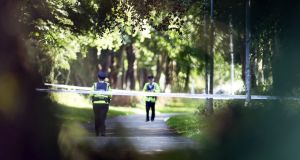 Gardaí at the scene at Coolmine Woods where the remains of the woman were discovered shortly after 2pm. Photograph: Collins 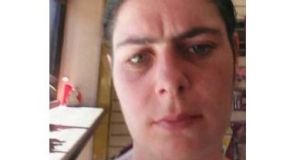 The remains were found this afternoon as part of a search carried out by gardai investigating the disappearance of Linda Christian. 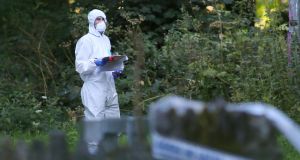 Member of the Garda forensics team at the scene at Coolmine Woods. Photograph: Collins Photos 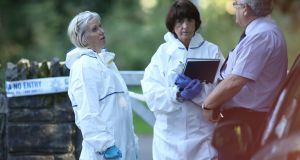 The badly decomposed remains of a woman have been found in a wooded area in suburban Dublin during a Garda search for a missing woman.

All of the resources of a murder inquiry have been committed to the case by the Garda.

Garda sources said given the level of decomposition to the body the results of a postmortem would be required to confirm the cause of death.

It was only when the cause of death was known that the Garda would know whether the woman met with foul play.

However, one strong line of inquiry is that the dead woman was killed and her remains have lain undiscovered in Blanchardstown, west Dublin, for several weeks.

The remains were found this afternoon as part of a search carried out by gardai investigating the disappearance of Linda Christian.

The 29-year-old single woman was last seen on June 24th in Blanchardstown, where she is from. Gardai issued a public appeal for information on whereabouts not long after she disappeared.

At the weekend the Garda renewed that appeal, saying Ms Christian’s family had become “very concerned for her welfare”.

The remains of a woman were found in the woods at about 2pm between Clonsilla Road and Snugborough Road in Blanchardstown.

As soon as the remains were discovered the area, which is used as a shortcut for local people into a nearby housing estate, was sealed off.

The State Pathologist’s Office was notified and the body was left in situ. It was examined at the scene by the State pathologist before being removed for a full postmortem.

That examination was ongoing on Monday evening and the results were expected to be known to gardai at some point on Monday.

The Garda search teams that discovered the remains have also searched the area for anything of evidence. The Garda Technical Bureau has also examined the area.

Locals at the scene have described their shock at the discovery in the popular local walking spot .

Residents in the Coolmine Park Housing Estate told The Irish Times that they had reported a bad smell in the park to the local County Council several times over the past week.

Directly across from the entrance to Coolmine Woods a local soccer match was taking place as deputy State pathologist Dr Margaret Bolster conducted an examination on the remains.

Lisa Kirwan who was out walking her dog described her “horror” of such a discovery on her doorstep.

“I was literally out for my morning run at 8am this morning and ran through the woods. I am always passing through their with the dog or out on my own for a run. It’s absolutely horrifying to think that a woman my age may have been killed in there.

Garda were conducting a thorough search of the area with all entrances to Coolmine woods remaining sealed off.