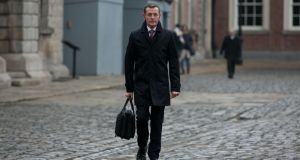 Mr Callinan also told Mr McCarthy that Sgt McCabe was not to be trusted, in what Mr McCarthy felt was an attempt to shake his “conviction” in the report on cancelled penalty points, he told the tribunal on Friday.

Mr McCarthy said that when the tribunal asked those with information to get in contact: “It was quite clear to me I was obliged to come forward.”

The tribunal is looking at allegations that senior gardaí­were smearing the whistleblower to politicians, journalists and others.

The tribunal has heard previously that the DPP directed no prosecution after an historic abuse allegation was made against Sgt McCabe in 2007, saying that the Garda investigation found no evidence that a crime was committed.

Seamus McCarthy, Comptroller and Auditor General from May 2012, told the tribunal that his office received a file of 4,000 cancelled penalty points notices from Sgt McCabe in August 2012.

Sgt McCabe alleged that some of the notices were cancelled illegally and corruptly. A second, similar file was received in October of that year from Noel Brett, chief executive of the Road Safety Authority.

Mr McCarthy said he was aware of rumours surrounding the disappearance of a computer containing graphic imagery, seized during a criminal investigation, and that “there was some reference to a role played by a station sergeant in relation to the loss”.

As a result, when Mr Callinan referred to a sexual offence investigation, Mr McCarthy thought this might refer to the missing computer.

Mr McCarthy said the commissioner approached him and raised Sgt McCabe’s name. “He was not to be trusted, that he had questions to answer, and that there were sexual offence allegations against him,” Mr McCarthy said.

“The only thing I could think of was the instance where a whistleblower was alleged to be involved in the disappearance of a computer and I concluded the matter the commissioner was referring to was that issue,” Mr McCarthy said.

He said he had not spoken to anyone about what Mr Callinan told him before the tribunal was set up.

Mr Conor Dignam SC, representing Mr Callinan, put it to Mr McCarthy that his client did not mention Sgt McCabe by name outside PAC and that he had said that Sgt McCabe’s allegations were “questionable”, not that he had questions to answer.

Mr McCarthy said that was not what he recalled. Mr McCarthy also denied he was the one who had said he had heard rumours of “McCabe being investigated over an allegation of a sexual nature”.

Mr McCarthy said he thought that the conversation with Mr Callinan could be “somehow an attempt to shake my conviction in my report”.

But he said this was moot, as by then his report had been completed, and his office had carried out its own independent investigation of the penalty points cancellations.

“I stood over it and I still do,” Mr McCarthy said.

Mr Andrew McLindon, the civilian director of communications at An Garda Síochána, said he did not hear any comments by Mr Callinan to Fianna Fáil TD, John McGuinness, at the PAC meeting, and that Supt David Taylor did not tell him about any comments. “I wasn’t party to those conversations,” he said.

Mr McLindon, who has a position equivalent to the rank of chief superintendent, said that in meetings preparing for the PAC appearance, Chief Supt Fergus Healy suggested that Mr Callinan should praise whistleblowers in his opening comments for bringing forward information. This was supported by Ms O’Sullivan, but ruled out by Mr Callinan.

Mr McLindon said that because of the “culture and nature of the organisation”, Mr Callinan was more likely to listen to advice from members of the force than civilians, and “that was something I had to work with”.

Mr McLindon said he could not explain why references to 2006 allegations against Sgt McCabe were included in notes during the preparatory meetings before the commissioner’s PAC appearance.

Mr McLindon said he was “shocked and surprised and concerned” when Mr Callinan used the word “disgusting” to describe whistleblowers at the PAC hearing, and felt it was a very strong term.

Afterwards, Mr McLindon looked into arranging an interview with RTÉ presenter Sean O’Rourke, where Mr Callinan could “move back” from the term. However, after a weekend considering the issue, he said Mr Callinan decided against the interview.