Joanne and Keith Lee: Dead after a spiral of drugs, betrayal and violence

Cocktail of cocaine abuse, depression and an affair ended in Keith murdering Joanne 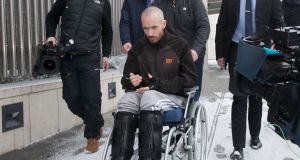 The death of murder suspect Keith Lee in Mountjoy Prison marks the end of a chaotic spiral during which he murdered his wife, Joanne, before dying by suicide.

A cocktail of cocaine abuse and depression, all accelerated by his extramarital affair, culminated in Keith Lee murdering his estranged wife two months ago.

As that crime, and Joanne’s body, were discovered on a Thursday afternoon in mid-February, Lee jumped from a third-storey apartment window in Ranelagh, south Dublin, seeking to end his own life.

His fall smashed up his body but did not result in his death.

As he lay on the ground he inflicted injuries on himself in a second attempt to take his life. However, a quick-thinking garda intervened and stemmed the bleeding.

That, without question, saved Keith Lee’s life. He was taken to hospital, with two broken legs, and other smashed bones.

A month of treatment was followed by his arrest and immediately he was deemed fit to face questions. He was then taken to court, in a wheelchair through the snow, to be charged with Joanne’s murder.

Still in a wheelchair and with casts on both lower legs due to his three-storey jump, he was allocated a wheelchair-accessible cell on D Wing of Mountjoy Prison.

This morning he was found dead in that cell; his third attempt to take his own life having proven successful. He was 43 years old.

A former chef, Keith Lee lost his job in a Dublin hotel last year after developing a worsening cocaine habit.

The Dubliner also had an affair with an American woman. And when Joanne, née Ball, discovered this, she confronted him and their marriage fell apart.

Out of work and with a drug habit, Keith Lee began selling drugs. While he had never come to the attention of the Garda, that changed last autumn.

In October he was found in possession of drugs valued at €11,000. He was not charged at the time but the inquiry was ongoing.

His next contact with the Garda was on Tuesday, February 13th last. He called to Store Street Garda station in Dublin and reported Joanne missing.

In making his missing persons report he told the Garda that Joanne had suffered from anxiety and depression and had attempted suicide in the months previous.

Because of this, he claimed he was very concerned for her welfare. However, while the details supplied to the Garda about Joanne’s fragile mental state were true, not much else was.

The reality was that the 38-year-old from Coolock in north Dublin was not missing. She wasn’t even alive at that stage.

Keith Lee had strangled her to death in a rented apartment on Ranelagh Road. In a panic he had wrapped her body tightly in a sleeping bag and concealed it, with a plastic bag over Joanne’s head, in a wardrobe in the flat.

Gardaí believe he murdered Joanne up to 48 hours before reporting her missing and had done so during a cocaine binge after they had gone hill-walking in Co Wicklow.

When the effects of the drugs wore off he gathered himself enough to engage in a crude effort to cover his crime.

He went to Store Street and explained that he had previously lived with Joanne in a house in the Garristown area of Co Meath, which was true. Indeed, the last independent confirmed sighting of her was in that area on February 5th.

But Lee told the Garda they had been trying to reconcile. He said they had been staying in a house around North Strand in Dublin’s north inner city.

He claimed that while staying at that house, and trying to work through their differences, Joanne had vanished.

The gardaí took his report and began a missing persons inquiry. Joanne’s family, who had become concerned because they were unable to contact her, also reported her missing.

Lee’s story sounded plausible, but as the gardaí began their initial basic checks, his tale fell apart. The Garda’s first port of call was to the address around the North Strand where Lee claimed he and Joanne had been living.

A family lived at that address and they said while they knew Keith Lee they were not close to him and neither he nor Joanne had been staying there.

With Lee’s lies exposed a red flag went up over the case and the search for Joanne gathered pace. Gardaí continued to trace and speak to people she knew, but nobody had seen her.

Efforts by gardaí to contact Lee by phone were not successful and they also now had no address for him.

Then, two days after Lee reported Joanne missing, the case was cracked open; a sighting of her car proving the breakthrough.

The 2008 silver Nissan Micra was reported parked illegally outside a building on Ranelagh Road, south Dublin. Gardaí decided to go there and went into the building, which was split into rented flats, to carry out door-to-door inquiries.

As they made those inquiries they came upon a third-storey apartment barricaded from the inside. They heard a dog barking and suspicious noises, though their calls went unanswered.

They became concerned that Joanne might be inside, and perhaps in danger or distressed.

The gardaí on the scene decided to force their way into the apartment by breaking down the door. As they did so the man who was inside – Keith Lee – jumped out the window.

One of the gardaí went to assist him after he landed on the ground at the back of the building. And the other garda began searching the apartment, finding Ms Lee’s body in the wardrobe.

Neither Lee nor Joanne had any links to the Ranelagh apartment. It was being rented by a couple who were abroad for a period.

In their absence the rent was still being paid by their social welfare payments. It appears the keys to the property had been passed around among a group of people, including Keith Lee, who had been staying there for a short period.

How somebody who was such an obvious suicide risk could have ended his life in a prison is unclear.

But separate investigations by the Irish Prison Service and the Garda are now underway.