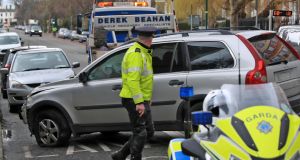 A man and a woman have been arrested after a hit-and-run incident in central Dublin in which a garda was injured.

A Garda spokesman said the incident happened just before 11am on Macken Street in south Dublin.

The vehicle, a light grey Volvo XC90, failed to stop at a Garda checkpoint and, in the process, hit a garda.

He was taken to hospital where he was being treated for what are believed to be non-life threatening injuries.

The Volvo sped on towards Waterloo Road with, according to witnesses, its front near-side tyre blown out.

At Waterloo Road, the vehicle went out of control and crashed into a Dublin City Council dust cast and a kerb.

The pair fled the scene before being caught by gardaí and arrested.

Gardaí said a man in his 20s and a woman in her 30s were detained for questioning at Irishtown Garda station.