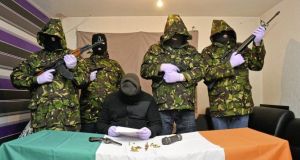 The group is understood to be made up of a breakaway section of the dissident republican organisation Óglaigh na hÉireann, which announced a ceasefire earlier this year.

The uncle of a man shot dead by dissident republicans has said he feels “sickened” by the emergence of another group which has threatened to “execute” drug dealers.

William Allen – whose nephew Andrew was killed by Republican Action Against Drugs (RAAD) in 2012 – said no group had the right to threaten or attack anyone.

“They’d be doing their own communities as well as everybody else in Northern Ireland a favour if they would just go away,” he said.

In a statement to the Irish News, an organisation calling itself the Irish Republican Movement said that anyone involved in the drugs trade within nationalist communities must “cease immediately”, or face death.

It was accompanied by a photograph of five armed, masked men posing in front of a Tricolour.

The group is understood to be made up of a breakaway section of the dissident republican organisation Óglaigh na hÉireann, which announced a ceasefire earlier this year.

It is believed to be based in Belfast and West Tyrone.

In the statement, the group also issued warnings to anyone involved in burglary or other criminality, and said it would “actively target Crown forces” involving in policing republican commemorations.

“We saw it with RAAD, which basically came from former members of the Provisional IRA after the ceasefire, so every time we see organisations moving towards a peaceful path I think there’s a deliberate move to by some to find a way of continuing to exercise control.

“Drugs is such an emotive issue that often communities don’t really see what these people are really about, which is maintaining and enforcing control,” he said.

Mr Allen said such groups were helping to perpetuate a “Catch 22” situation in deprived communities.

“They are continuing to create more problems in areas which are already suffering from some of the worst economic conditions, mental health difficulties and levels of addiction in Ireland.

“They don’t just carry out attacks on people they regard on targets, the real suffering is done by the wider family and we know the impact on the wider family circle and on communities carries on for generations.

“It’s a vicious circle, and they are part of it.

“They’ll never be part of the solution because they are a big part of the problem,” he said.

Sinn Féin MLA Gerry Kelly called on the new group to “disband and get off the back of the community”.

“There is absolutely no place for this group.

“It seems this latest group has emerged from yet another split which is testament to the lack of any cohesion, strategy, support or credibility within dissident republican circles,” he said.

Paul Gallagher – a dissident republican and Independent councillor in Strabane, Co Tyrone – said the new organisation was a splinter group of a splinter group, and small in numbers.

“I think their process needs to be challenged, and I for one, as a republican who works in the community, will be challenging them to look at other methods.

“We need to try to engage them in dialogue and also work with people on drug addiction programmes, that’s where the results will come,” he said.