Call for jails to release more prisoners due to coronavirus crisis

A small number of prison officers have contracted Covid-19 virus 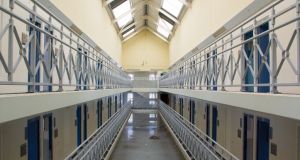 To date no prisoners in Ireland have tested positive, though some have been placed into isolation as they have shown Covid-19 symptoms. Photograph: iStock

The release of prisoners from Irish jails has stalled and more should be set free to prepare for the surge in Covid-19 cases, social justice campaign Fr Peter McVerry has said.

He has pointed out that the number of Covid-19 cases in the prison system in England and Wales has almost trebled in the past five days, adding a decision to bring to an end the release of prisoners in Ireland was a mistake.

To date no prisoners in Ireland have tested positive, though some have been placed into isolation as they have shown Covid-19 symptoms.

There have been a small number of cases among prison officers. The Irish Times understands at least one officer is among the HSE’s confirmed cases and sources believed a second officer has also contracted the virus. However, it is not clear where they contracted the virus.

The Irish Prison Service and Prison Officers’ Association both declined to comment on whether the two officers were suffering from the virus. Neither has any plans to confirm or comment on any specific cases that may arise during the crisis.

Homelessness campaigner Fr McVerry, who is also a social justice advocate with the Jesuit Centre for Faith and Justice, said while hundreds of prisoners had been granted temporary release over the past three weeks, the process had now stalled and temporary release numbers were no longer increasing.

“This decrease does not go far enough, deep enough or fast enough to address the current crisis,” he said.

The Jesuit Centre for Faith and Justice has recommended that in order to prevent prisons becoming “cluster-zones for the Covid-19 virus”, Minister for Justice Charlie Flanagan should approve the release of prisoners with less than six months to serve at present.

The centre said the Irish Prison Service should look to England and Wales where there had been “hesitancy” in releasing prisoners temporarily and now 69 prisoners and 14 staff members had tested positive.

It added about one in four prison staff were absent from work due to Covid-19 related issues in England and Wales. In that context, it said, it was “a grave error of judgement” for the Irish Prison Service to be “reactive at a time like this”.

Social policy advocate at the Jesuit Centre for Faith and Justice, Keith Adams, believed the measures taken to date by the prison service were not sufficient.

“A small surplus of cells for isolating symptomatic prisoners is not the level of preparedness required for a closed institution in a public health crisis,” he said.

“Continuing with temporary releases to bring the population to ‘one cell, one person’ should be the goal.”

The Irish Prison Service said it had 3,500 employees and that it was following all of the guidance and measures set down by the Government on Covid-19.

“It can only be expected that out of a staffing cohort of that size, there will be a certain number of staff who have been advised to self-isolate at any given time. However, the vast majority of staff continue to report for duty as normal,” it said in reply to queries.

The Irish Prison Service has released almost 300 prisoners temporarily in recent weeks, adding to some 300 prisoners generally on temporary release at any one time.

Those who have been granted temporary release are non-violent criminals nearing the end of sentences or those who were in prison to serve short sentences.

A unit in Cloverhill Prison, Dublin, has been assigned as an isolation facility and any prisoners showing symptoms of Covid-19 have been tested and isolated in that area of Cloverhill.

Prison visits have also been cancelled in a bid to stop the spread of the virus. The prison service is currently working on plans to put in place screening for Covid-19 for all staff and other people whose work takes them into prisons.