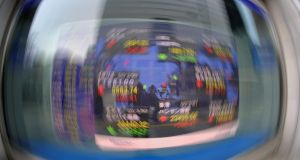 In the US, there were double-digit increases for Exxon Mobil and Chevron, which helped drive gains of more than 1.6 per cent in the first half of trading for both the S&P 500 and the Dow Jones Industrial Average.

In Europe, Royal Dutch Shell, BP and Total pushed markets higher after a lacklustlustre start to the day’s trading.

The Iseq index in Dublin finished down 2.2 per cent, as key stocks Ryanair, Glanbia and Kerry all finished in the red.

The FTSE 100 of blue-chip stocks added 0.5 per cent, but the mid-cap FTSE 250 was 0.8 per cent as several stocks reported fallout to their revenues and outlook from the Covid-19 pandemic.

But the mood remained fragile as investors weighed the continuing impact of the coronavirus outbreak and the extension of lockdown regimes in several European countries.

The first quarter of 2020 was among stock markets’ worst in history, and further declines are expected as shutdowns to combat the Covid-19 outbreak drive more corporate budget cuts.

Analysts are predicting a 21.9 per cent decline in earnings for companies listed on the pan-European Stoxx 600 in the second quarter, according to Refinitiv data.

The shock US unemployment figures pointed to deep economic ructions from the coronavirus outbreak, fanning concerns over a global recession after data on Wednesday showed factory activity crashing in the euro zone.

The massive 6.65 million total far exceeded the median estimate of 3.5 million in a Reuters survey of economists.

But on equity markets, the dismal figures were outweighed by the oil price jump, which came after US president Donald Trump said he expected Saudi Arabia and Russia to reach a deal soon to end their price war and announce an output cut of 10 million to 15 million barrels per day.

“The surge in crude is helping the mood, so we’re seeing some relief in markets that have been hammered,” said Richard Steinberg, chief market strategist at Colony Group, in Florida.

1 Citigroup warns that markets are out of step with reality
2 ‘I’m so lucky to be in the Caribbean – a million miles from Derry Girls’
3 Chris Johns: Past is another country when it comes to our post-pandemic future
4 Donohoe told insurers they risked ‘irreparable damage’ to reputation
5 Michael Smurfit: ‘I asked Trump to invite me to the White House for my 80th birthday’
6 Tobacco makers still trying to make a mint from Irish menthol market
7 Ireland stands to benefit in a big way from investing in public transport
8 Small businesses are cannon fodder in zealous anti-virus experiment
9 ‘The recovery needs to be a full-scale economic renewal’
10 Household savings soar as consumers stop spending
Real news has value SUBSCRIBE