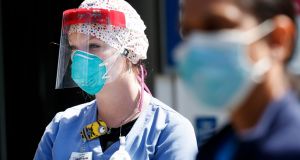 Nurses gather for a strike about their lack of personal protective equipment (PPE) outside a hospital in New York. The city is the epicentre of the coronavirus outbreak in the US. Photograph: Justin Lane/EPA

More than a million cases of coronavirus have been registered globally, and the number of confirmed deaths has passed 51,000, according to research by Johns Hopkins University.

Italy remains the country worst affected by the outbreak, with 13,915 deaths, followed by Spain, with 10,003 deaths. The United States is now the third worst affected country, with 5,316 total deaths.

Europe together accounts for over half of cases and more than 70 per cent of deaths linked to the virus, as countries in southern Europe with higher older age demographics have been hit particularly hard.

The global fatality rate is now over 5 per cent of all reported cases, with countries including the United Kingdom, the US and Spain reporting a spike in fatalities over recent days.

On Thursday the UK recorded its highest daily death toll from coronavirus, with 569 people reported to have died in a single day. A total 2,921 people have died from from the virus since the epidemic began and the number of new cases of the disease and hospital admissions continues to rise.

Amid mounting criticism over its strategy in fighting the disease, the British government promised to test 100,000 people a day for coronavirus by the end of April, 10 times the current level.

Health secretary Matt Hancock told a press briefing in Downing Street that research institutions and private firms would help to expand the testing programme, which has lagged behind other European countries.

“Our ultimate goal is that anyone who needs a test can have one. The new national effort for testing will ensure that we can get tests for everyone who needs them and I am delighted that the pharmaceutical industry is rising to this challenge, putting unprecedented resources into testing,” he said.

In France, the number of cumulative known deaths from coronavirus surged to nearly 5,400 on Thursday as the country started including fatalities in nursing homes in its data.

Jerome Salomon, head of the public health authority, said the number of coronavirus-related deaths in hospitals rose 12 per cent on Thursday to 4,503 from a day earlier.

He added that a provisional tally showed that a cumulative 884 people in total had died in nursing homes. This makes for a total of 5,387 lives lost to coronavirus in France.

The outbreak in Spain is the second-most severe in Europe after Italy. The labour ministry on Thursday reported more than 300,000 new jobless claims for March, the highest monthly increase on record.

“The central issue is no longer whether we’ve reached the peak or not, it seems like we are there,” health emergency chief Fernando Simon, who was himself diagnosed with the virus this week, told a briefing.

“The key issue is to make sure that the national health system is capable of guaranteeing adequate coverage of all our patients and treatment,” he said.

The death toll in Italy climbed by 760 to 13,915, the country’s civil protection agency said on Thursday, slightly higher than the daily rise of 727 registered a day earlier.

The number of new cases was steady, growing by 4,668 from a previous 4,782, bringing total infections since the outbreak first came to light on February 21st to 115,242.

Thursday was the fourth consecutive day in which the number of new cases remained within a range of 4,050-4,782, seeming to confirm government hopes that the epidemic has hit a plateau, ahead of a hoped-for decline in the near future.

Italy accounts for around 28 per cent of all global fatalities from the virus.

In Lombardy, the epicentre of the outbreak, the daily tallies of deaths and cases were both down compared with those of the day before, coming in at 367 and 1,292 respectively.

In other developments in the global coronavirus outbreak on Thursday:

With the virus now present in 205 countries and territories, the head of the World Health Organisation (WHO) has voiced deep concern about “the rapid escalation and global spread” of Covid-19 cases from the coronavirus.

“In the past five weeks, there has been a near-exponential growth in the number of new cases and the number of deaths has more than doubled in the past week,” Mr Tedros told a virtual news conference in Geneva where the UN health organisation is based.

“In the next few days we will reach one million confirmed cases and 50,000 deaths worldwide,” he said. – Guardian, Reuters, PA