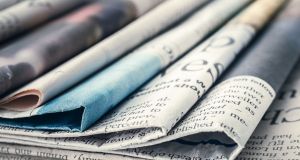 Journalism may have been deemed an essential service during the Covid-19 crisis, but the media sector has not escaped the wave of layoffs and pay cuts seen across the economy.

Local newspapers are among the hardest hit, with a plunge in advertising revenues estimated to be as deep as 70 per cent in instances.

“It has literally fallen off a cliff,” said Johnny O’Hanlon, director of representative group Local Ireland.

Iconic Newspapers, which publishes more than 20 titles, has temporarily laid off almost 30 editorial employees and made significant cuts to the rest of its 150-strong workforce for a six-week period.

The National Union of Journalists (NUJ) said it was aware of four journalists at the group being made redundant. It has been seeking a meeting with its owner, British businessman Malcolm Denmark, but is yet to receive a reply.

NUJ Irish secretary Séamus Dooley said this was “no surprise” as the group, which counts the Limerick Leader and Kilkenny People among its titles, does not recognise trade unions.

Celtic Media Group, which employs about 90 people, was the first Irish newspaper group to indicate it would suspend employment for some staff this month, while cutting pay and hours for others. However, it is understood to be examining how it can avail of the State’s Covid-19 wage subsidy scheme, which the NUJ has called on media groups to explore their eligibility for rather than resorting to layoffs.

It is particularly concerned by events at Iconic, where Denmark initially emailed employees to assure them although there would be a need for “cost reductions”, the group was “in a stronger position than most” to get through the crisis. Its titles made a profit of €1.13 million last year.

“It will be physically impossible for the remaining staff to bring out a product that meets the needs of the community,” Dooley said.

Other local news groups have gone into retrenchment mode. In a move that affects employees of the Impartial Reporter in Enniskillen, Newsquest Media Group, which owns hundreds of UK titles, last week announced pay cuts and put some workers on leave.

JPI Media, which in 2018 acquired titles owned by the former Johnston Press group, has suspended production of 12 free newspapers in Britain and temporarily laid off 350 staff for an as yet undecided period. The company publishes titles in the North including the News Letter and the Derry Journal.

These cutbacks follow an unprecedented fall in what were already fragile advertising revenues. Local businesses afflicted by closures and long-term uncertainty have been forced to halt advertising.

A sharp drop in footfall in the places newspapers are sold and the absence of sports coverage is also impacting circulation and contributing to fears across newsrooms that some temporary layoffs could become permanent and, perhaps, that some long-established titles may not recover.

To date, the Irish papers to have stopped printing have almost all been free ones. Celtic Media has ceased printing the Offaly Independent, while the Dublin People Media Group has suspended publication of the Northside People and Southside People “with deep regret”, saying it would review the decision on a week-to-week basis.

On Thursday, however, paid weekly regional title the Northern Standard, founded in 1839, told readers in Monaghan and surrounding counties that it was suspending printing until April 23rd. The decision was taken “with great reluctance”, it said.

O’Hanlon said it was a “no-brainer” for free titles to stop, as they cannot function without advertising revenues and incur distribution costs. He added that he had been “pressing hard” on members not to close paid titles, which have endured a drop-off in ad revenues of 50-70 per cent.

“Albeit that we have slashed paginations, we have to keep going.”

O’Hanlon is calling on the Government to direct its own advertising to local titles as a matter of urgency. Local Ireland is also seeking financial aid for its members similar to the €2.5 million allocated last week to support independent radio.

The media sector as a whole is braced for further pay cuts and job losses. Communicorp, the radio group owned by billionaire Denis O’Brien, and Journal Media, the company behind TheJournal.ie, have announced pay cuts for staff.

Cuts of 10 per cent to 25 per cent will apply to different income bands at Communicorp, the company behind Newstalk, Today FM, Spin 1038, Spin South West and 98FM.

At Journal Media, which is majority owned by Daft.ie founders Eamonn and Brian Fallon, the pay cuts will range from 5 per cent to 20 per cent. It is also reducing hours for staff on its sports site The42.ie and will cease publishing business site Fora.ie.

In common with commercial radio stations, the majority of the digital news publisher’s income is derived from advertising, the outlook for which is grim.