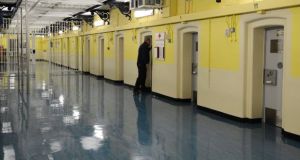 A consignment of personal protective equipment (PPE) destined for use by staff in Irish jails has gone missing.

A prison officer has been suspended pending the completion of an investigation into the matter by the Irish Prison Service.

Sources said the inquiry had not reached any conclusions and that no finding of wrongdoing had been made against any member of staff, including the suspended officer.

The Irish Times understands the items that have gone missing are face masks that were destined for staff working in the prison service, which is attempting to avoid an outbreak of Covid-19.

When masks were distributed to a number of jails it was discovered that at least 220 were unaccounted for.

The investigation aims to determine if the masks were stolen and, if so, by whom. The matter was being taken very seriously as the masks were badly needed for prison officers and other staff who were dealing with prisoners in jails across the State.

Sources said while there was still an ample quantity of PPE for all staff, the disappearance of the face masks purchased to protect employees was being treated very seriously in light of the seriousness of the pandemic.

In reply to queries about the protective masks going missing, the Irish Prison Service said it did not comment on internal matters.

More than 200 prisoners have been released early in an attempt to keep numbers down and create capacity in the system to isolate and move prisoners around as a contingency measure to cope with any outbreak of the virus in the system.

It was announced on Friday that all prison visits were being stopped in an effort to reduce the risk of the coronavirus entering the prison system.

While some prisoners with possible Covid-19 symptoms were being monitored, there have been no confirmed cases in the prison population.