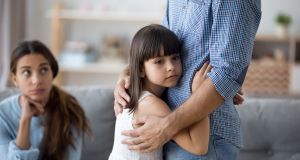 He fears that what relationship he has left with his children will be further eroded at the end of this long period of social isolation with their mother. File photograph: Getty

After Geraldine’s marriage broke up six years ago, her highly controlling husband vowed he would take their three children off her.

Two of them now refuse to come to her for the week-on, week-off access ordered by the court and, while she continues to see the youngest son, she wonders for how long.

She knows, for instance, that the week he is with her, his father makes a point of giving treats to the other two siblings which, of course, her son will hear about when he goes back.

“Nobody wants to be left out,” she says, so while he is trying to be loyal to both his parents, she fears he may succumb to the pressure to choose sides.

She has been in and out of court looking for enforcement of the access order. But her former husband shrugs his shoulders, says he’s not stopping them and he can’t help it if they don’t want to see her.

“It is a weak argument,” she says. “If they didn’t want to go to school, would you keep them at home?”

A psychologist has diagnosed parental alienation, she says. Yet, still it seems to her that the family courts are very slow to enforce orders or recommendations. “It is all done on the basis that people should behave as they should. But, if that was the case, we’d never be in this situation,” she says.

“I feel I am spending good money after bad so some time in the future, if they do come back, I can say I did absolutely everything I could. That’s my concern for myself; my main concern is for my children.

“People say they will come back to you when they are older. To me that is no consolation because these children are destroyed; their potential is wrecked. They will have lifelong psychological issues.

“If they wake up one day and say, ‘Mum wasn’t that bad’ – what are they going to think of their Dad?”

Adam has similar concerns for his two children, one of whom has not visited him at home for nearly two years. “People say to me, ‘sit tight and they’ll come back to you’. That’s lovely but you miss out on all the milestones, them growing up. I have kept all the emails to show how much I have been fighting for them while she tells them I ‘ruined’ the family and left them.”

His former wife “changed into quite an angry person” after the arrival of the children, he says, and started to blame and belittle him.

They grew apart despite living under one roof. When he was off work at the weekends, she would often take the children to her parents for the day, telling him: “If you want to see them, follow me.”

“I was called ‘useless’ every day,” says Adam, who eventually left the family home. “I had to get out to save myself first. She wasn’t well and, even living in the house, I wasn’t seeing the kids.”

He had to take her to court to get access to the children and was granted Wednesday overnight and every second weekend.

The children loved being with him but, he says, whenever he was returning them, his ex-wife would give the youngest child in particular really dirty looks, “as if to say, ‘you stayed away from mammy for a night’ ”. He has no doubt she has done her best to turn the children against him, evidently succeeding with the youngest.

The older child was still coming until, in the face of the Covid-19 pandemic, his former wife decided some weeks ago it was too dangerous. Yet, he says, she continued to allow members of her extended family into the house.

President of the District Court Judge Colin Daly has said estranged couples are free to vary family court orders during the coronavirus crisis – as long as both parties agree.

“It’s just another excuse,” says Adam, who lives alone and is home from work, so believes he and his house pose no risk. Now he fears that what relationship he has left with his children will be further eroded at the end of this long period of social isolation with their mother.

Come for the houses but stay for the drama: Selling Sunset is back
8

Five ways to enjoy a heatwave outdoors during lockdown, without breaking the rules
10