Cabinet approves setting up Commission on Future of Policing

Recruitment; culture and ethos; oversight and legislative framework will be examined 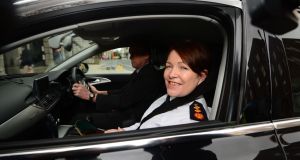 The Cabinet has approved the establishment of a Commission on the Future of Policing in Ireland in response to a series of recent controversies involving An Garda Síochána.

In a statement following today’s Cabinet meeting Minister for Justice and Equality Frances Fitzgerald said the terms of reference would be wide-ranging and allow for an examination of all aspects of policing.

Among the issues to be scrutinised are recruitment and training of personnel; the culture and ethos of policing; oversight and accountability and the legislative framework for policing.

She said drafting of the terms of reference will involve consultation with opposition parties and relevant statutory bodies including the Policing Authority, the Garda Síochána Ombudsman and the Garda Inspectorate.

Ms Fitzgerald briefed the Cabinet on the Garda controversies today following revelations the number of breathalyser tests were exaggerated by one million and 14,700 people were wrongly convicted of motoring offences.

Other concerned groups, including the Garda Inspectorate, the Policing Authority and GSOC will also be invited to give their opinion. The Garda unions may also be asked for their views.

Separately, the Oireachtas committee on justice has agreed it will submit a series of questions to Garda Commissioner Nóirín O’Sullivan.

At a meeting on Tuesday, committee members said they had a number of outstanding issues that required clarification from the commissioner.

The committee’s TDs and Senators have until 5pm to submit questions and it was agreed Ms O’Sullivan will have one week to respond. The committee will meet again on Wednesday.