Ibrahim Halawa must be released for medical tests, says doctor 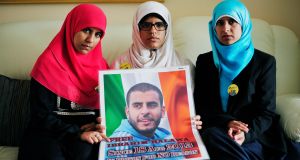 A doctor who visited Ibrahim Halawa in prison in Cairo last week has recommended that the Irish man be released to facilitate further medical tests after more than three years in jail in Egypt.

The doctor’s visit follows a decision by the Government last month to ask the Chief Medical Officer to nominate an independent medical expert who would be given access to Mr Halawa.

Mr Halawa, who is from Firhouse in south Dublin, was arrested in the Al Fateh mosque in Cairo with three of his sisters during protests over the ousting of then president Mohamed Morsi from office August 2013. His sisters were later released.

Mr Halawa’s trial has been adjourned 20 times and is due to resume on Wednesday, April 5th.

Mr Halawa’s sister Somaia warned on Monday that her brother’s health was in “a very serious condition” and that he was suffering from dehydration and low blood sugar levels. She said the family had received news from an inmate at the prison that Mr Halawa had been rushed to the clinic due to a sudden drop in blood sugar levels.

Somaia has also warned that her brother remains on hunger strike and that he is suffering from a skin disease she linked to the “inhuman prison hospital” where he is being held.

Minister for Foreign Affairs Charlie Flanagan confirmed on Monday that the Government had arranged for a doctor to visit Mr Halawa but that his medical history and treatment would remain confidential. He added that the Taoiseach had again written to Egyptian president Abdel Fattah el-Sisi about the “complex and sensitive case”.

“It has long been the Government’s stated desire to see Mr Halawa returned to Ireland and we have made direct appeals to the Egyptian government on a number of occasions,” said Mr Flanagan. He said he had also discussed Mr Halawa’s situation with former Egyptian foreign minister Abou El Gheit and the EU’s high representative Federica Mogherini who he says has a personal interest in the case.

“This case remains a high priority for the Government and it continues to receive unprecedented attention and resources in Dublin and in Cairo. We will continue our efforts to see Ibrahim returned to Ireland without delay. In the interim we will continue to provide very high levels of consular care.”

Asked last week what efforts were being made to ensure the release of Mr Halawa from prison, Mr Flanagan said the reality was that “only the Egyptian authorities can make the decision to return him to Ireland”. But he added that the Government was maintaining open lines of communication with all levels of the Egyptian Government.

Irish authorities have made 55 consular visits to Mr Halawa since his arrest in August 2013.