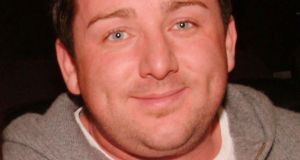 Roy Collins, who was shot dead in 2009. His father was believed to have been the intended target. Photograph: Press 22

Two Limerick criminals have opened an appeal against their convictions for the murder of businessman Roy Collins in Limerick eight years ago.

Wayne Dundon (39), of Lenihan Avenue, Prospect, Co Limerick, and Nathan Killeen (27) of Hyde Road, also in Prospect, had pleaded not guilty at the nonjury Special Criminal Court to the murder of Roy Collins at Coin Castle Amusements, Roxboro, on April 9th, 2009.

Mr Collins, a 35-year-old father of two, who was engaged to be married, died in hospital a short time after he was shot.

The three-judge Special Criminal Court found Dundon had ordered the murder from prison and that Killeen was the getaway driver for the gunman, James Dillon.

Mr Collins’s father, Steve Collins, was believed to have been the intended target of the attack, due to his involvement in a previous successful prosecution against Dundon for a threat to kill.

Accordingly, Dundon and Killeen were given mandatory life sentences.

Central to the defence’s case, Mr Farrell said, was clear and explicit evidence of collusion between McCarthy and other witnesses.

But the trial court simply asserted, he said, that it had decided to rely on the uncorroborated testimony of McCarthy without indicating how the controversies had been resolved.

He said McCarthy measured up very poorly when one considered an Innocence Canada report on “jailhouse informers”. It was very easy to make an assertion but virtually impossible to disprove.

The approach of the Special Criminal Court on this issue was “truly startling”, he said, because it suggested that, although this was interesting, the trial court would not consider it in the absence of evidence.

The trial court seemed to think it was up to the defence to establish how the Canadian judicial system treated jailhouse informers, he said.

Mr Farrell said an appeal court would have no difficulty quashing a decision of the Refugee Appeal’s Tribunal, for example, if that body had identified a whole series of controversies and failed to grapple with them.

Mr Farrell said he took issue with the Special Criminal Court’s treatment of prosecution witnesses as not being accomplices in law.

He alleged that they were chargeable persons arising out of the same set of facts. It was patent on the evidence that “each and every one of them” committed the offence of withholding information, he alleged.

He said the McCarthy and Collins families had been engaged in discussions among themselves about what benefits were going to be “reaped” and the trial court’s judgment was “manifestly defective” in failing to deal with any of those issues.

Mr Farrell said the defence applied for a direction to find his client not guilty on the substantive issue as well as on the lack of a proper Garda investigation. It was notable, he said, that the court never dealt with the latter application.

Counsel for the Director of Public Prosecutions, Michael O’Higgins SC, said Dundon’s lawyers had made a lot of points but most of them simply did not “stack up”.

Mr O’Higgins said the case was brought on the basis that McCarthy heard Dundon in a prison cell across the corridor threatening James Dillon and commanding him to do something over a phone.

If that call was proved to be a direction to murder a member of the Collins family, then the case came down to a “very narrow” issue – whether Carthy was telling the truth.

Mr O’Higgins said the Special Criminal Court summarised the witness testimony in its judgment “warts and all”. Mr Farrell was submitting, counsel said, that there was a bit missing in the middle about why the court ignored the warts.

It was simply not sustainable for Dundon to claim, when looking at the judgment, that he did not know how he found himself in this position, Mr O’Higgins said.

He said the Special Criminal Court believed McCarthy, as it was entitled to do.