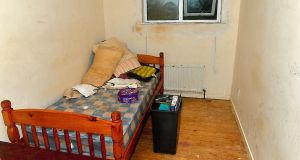 A room in the home of Keith and Caroline Baker. Photograph: PA/PSNI

A married couple who ran a so-called “House of Horrors” in Craigavon, Co Armagh were jailed on Tuesday for years of serious sexual abuse of a vulnerable woman.

Keith Baker (61) and his 56-year-old wife Caroline had previously pleaded guilty to a catalogue of sexual abuse of the now 53-year-old woman over a period of eight years. Keith Baker was sentenced to 15 years in prison while Caroline Baker, who Judge Patrick Lynch QC said was under the “psychological hold” of her husband, was sentenced to three years – 18 months in prison, 18 months released under licence.

One of the conditions of Caroline Baker’s sentence was that she must have no further contact with her husband. Judge Lynch referred to the “total immorality” of the crimes against their victim and of how Keith Baker came across as a “Svengali figure” with control his wife, the victim and another woman, Miss X, who finally alerted the authorities to the crimes.

“It is not easy to understand how these individuals so lost their moral compass that they could subject an individual who clearly exhibited serious mental defects to mistreatment in sexual terms, depriving her of any dignity, and even depriving her of the most basic of living standards,” said Judge Lynch.

The victim who has severe learning difficulties was kept by the Bakers at their Craigavon home in a cold, locked room without carpet, a light bulb or bedclothes or curtains. There was a closed circuit TV suspended from a ceiling where the woman was held. The one toilet she had access to was overflowing with human excrement.

The woman was first brought to Northern Ireland by Keith Baker in 2004. It wasn’t until Christmas 2012 that police rescued her from her sexual incarceration. She emerged from the home badly confused, weighing just six stone, and with her teeth so badly rotted that she only had one sound tooth. A previous sitting of Craigavon Court was told that Keith Baker’s life was “totally dominated” by his sexual needs and desires.

Caroline Baker, wearing a grey jacket, black slacks and red scarf around her neck stood with her head bent down as Judge Lynch read out the sentence. She held her right hand to her chest at times as the judgment was read and at times appeared to be quietly crying.

Keith Baker wearing a grey zip-up cardigan and brown trousers sat in a wheelchair in the body of the court, mostly with his hand over his face, as the judge delivered his sentence.

The court had heard how Baker, who is originally from Guernsey in the Channel Islands, took videos over the years where he can be seen raping the woman. During many of the assaults Caroline Baker also was involved. Hundreds of indecent images of the woman also were found on Keith Baker’s computer. In one of the videos Keith Baker is heard to say to the victim that she had “learned quite a bit over the last few years”.

Judge Lynch when sentencing on Tuesday said the victim lived “totally isolated from the rest of society”. He noted how neighbours who had visited the Bakers’ house were unaware of her existence.

As well as the abuse the videos also depict the physical deterioration of the woman over the years from a state of being well nourished to a state of “emaciation”. The victim was brought from England to Craigavon in Northern Ireland where Caroline Baker is originally from. The woman was never registered for a doctor or dentist and no welfare claims were made in her name.

In 2004 her husband, who also has severe learning difficulties, reported her missing in England but it wasn’t until eight years later that her whereabouts were discovered. That happened after a woman referred to in court as Miss X raised the alarm.

Miss X, the court heard, also lived with Baker and was mother of four of his eight children – Caroline Baker the mother of the other four. The home was described by a lawyer as a “grossly unconventional household”.

The house consisted of two terrace houses knocked through, Numbers 3 and 4 Drumellan Mews, Craigavon, to make one large home. “Men lived in one half and the women in the other,” the court heard. During the case Miss X was described as “somewhere between a victim and defendant”. The North’s Public Prosecution Service had decided there was insufficient evidence to prosecute Baker for his alleged abuse of Miss X.

Last October Keith Baker pleaded guilty to 11 charges and his wife to seven. They admitted three charges they jointly faced, two of engaging in sexual activity with a mentally disabled person and one of inciting the victim to engage in sexual activity knowing that she had such a mental impairment and “knowing that because of it she was unlikely to refuse”.

Keith Baker admitted to further charges of oral and vaginal rape and of indecently assaulting the woman while Caroline Baker pleaded guilty to “aiding and abetting, counselling and procuring” her husband to rape the woman and a single count of indecent assault.

The offences occurred on various dates between March 15th 2004 and December 20th 2012. During the case the prosecuting lawyer, Toby Hedworth, QC, said the victim when asked after her release from the Craigavon home if she was now happy replied “Yes, freedom”.